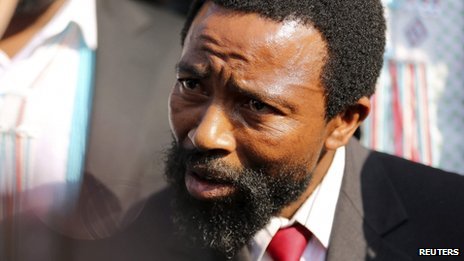 Last week, he accused President Jacob Zuma of being "just a Zulu boy", in a sign of growing ethnic divisions.

The mainly white DA is trying to boost its membership in black areas.

General elections are due next year, with the ANC, in power since white minority rule ended in 1994, expected to win.

King Dalindyebo is facing a threat to his traditional post from within his family.

His brother, Daludumo Mtirara, has refused to recognise him as king and is lobbying the government to strip him of the post.

Correspondents say King Dalindyebo's defection does not come as a surprise as he been involved in a long-running feud with the ANC, which he accuses of siding with his rivals in the royal family.

Democratic Alliance spokesman Mmusi Maimane said although they do not agree with some of the king's statements "anyone is free to join the DA", AFP news agency reports.

"We believe that he represents an important component of society in the Eastern Cape," Mr Maimane is quoted as saying.

King Dalindyebo has previously threatened to secede from South Africa.

He was convicted in 2009 of assault, kidnap and culpable homicide, and sentenced to 15 years in prison.

He is appealing against the ruling.

The charges relate to a dispute he had with some of his subjects. He was accused of kidnapping a woman and her six children, setting their home on fire and beating up four youths, one of whom died.

King Dalindyebo has also said he would stop smoking marijuana when Mr Zuma stops being corrupt.

Correspondents say his defection is a psychological blow to the ANC as he comes from its political heartland of the Eastern Cape.

However, it is unclear how much support King Dalindyebo commands, correspondents say.

The recruitment could backfire on the DA as the monarch has a criminal record, raising questions about the party's commitment to good governance, they add.

Mr Mandela was admitted to hospital on 8 June with a recurring lung infection.