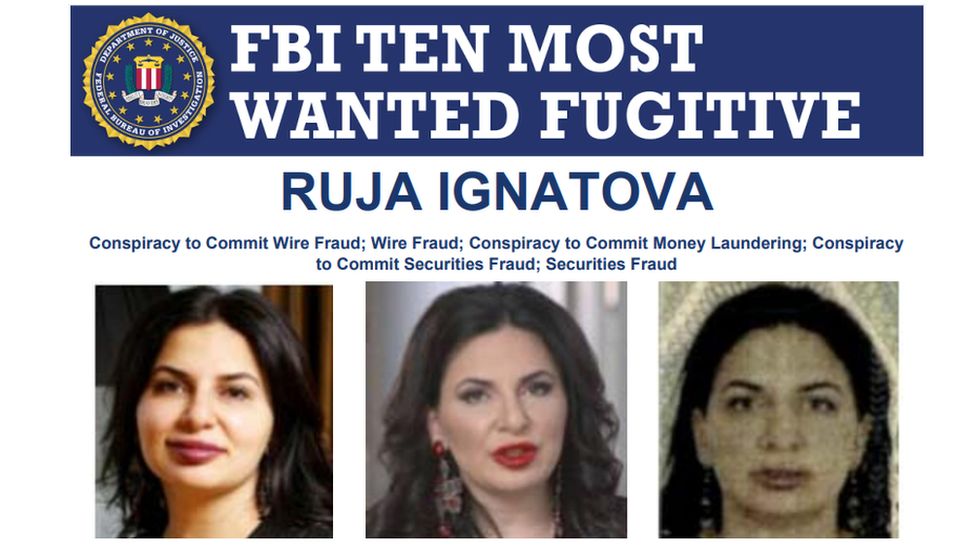 Ruja Ignatova, also known as the "missing Cryptoqueen", has been placed on the FBI's top 10 most wanted list.

The Bulgarian woman, believed to be in her 40s, is wanted for her alleged role in running a cryptocurrency scam known as OneCoin.

Federal investigators accuse the fugitive of using the scheme to defraud victims out of more than $4bn (£3.2bn).

She has been missing since 2017 when US officials signed an arrest warrant and investigators began closing in on her.

In 2014, OneCoin, a self-described cryptocurrency, began offering buyers commission if they sold the currency on to more people.

But FBI agents say OneCoin was worthless and was never safeguarded by the blockchain technology used by other cryptocurrencies.

According to allegations made by federal prosecutors, it was essentially a Ponzi scheme disguised as a cryptocurrency.

"She timed her scheme perfectly, capitalising on the frenzied speculation of the early days of cryptocurrency," said Damian Williams, Manhattan's top federal prosecutor.

The FBI adds fugitives to its most wanted list when it believes the general public may be able to assist in tracking them down.

A bureau notice published on Thursday offered a $100,000 reward for any information leading to the arrest of Ms Ignatova, who was charged in 2019 with eight counts including wire fraud and securities fraud.

She is the only woman on the FBI's 10 most wanted list.

Jamie Bartlett, whose BBC podcast investigation brought global attention to Ms Ignatova's story and the financial impact OneCoin had on her alleged victims, said the FBI's announcement on Thursday increased the chances of her being caught.

"This is probably the biggest development in the case since Dr Ruja disappeared in October 2017," he said.

Mr Bartlett, who has been investigating the case for years, said one of the reasons it had been so difficult to track down Ruja Ignatova is that she disappeared with at least $500m (£411m), helping her to hide from the law.

"We also believe she has high quality fake identity documents and has changed her appearance," he added, as well as raising the possibility that she may no longer even be alive.

Ms Ignatova was last seen boarding a flight from Bulgaria to Greece in 2017 and has been missing ever since.

OneCoin victim Jen McAdam told the BBC back in 2019 that she and her friends and family had thrown a quarter of a million euros away.

Ms McAdam said it all started from a friend's message about an unmissable investment opportunity. Sitting at her computer, the Glaswegian clicked on a link and joined a OneCoin webinar.

Over the next hour or so she listened carefully to people talking enthusiastically about this exciting new cryptocurrency - how it could transform her fortunes.

All of them were "very up-tempo, full of beans, full of passion", Ms McAdam said. "You are so lucky that you're seeing this webinar right now. You're in at such an early stage and it's just going to go like Bitcoin. It's going to go bigger."

Ms McAdam said it took her months to realise it was all a scam.