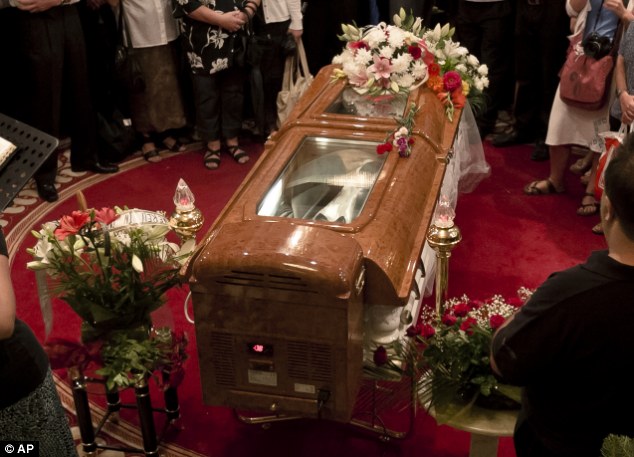 Thousands of Roma turned out for the funeral of their self-styled King as he was laid to rest in his hometown in Transylvania today.

Florin Cioaba, 58, who had taken to wearing a king's crown as the leader of the minority community, became famous around the globe for arranging a marriage for his 12-year-old daughter.

After watching her storm out of the church to avoid becoming a child bride, 'King' Cioaba became an advocate for education for Roma girls and began preaching that girls should not marry before the age of 16.

This despite the fact that his dutiful daughter Ana-Maria had returned to the church moments later and was indeed married off to a 15-year-old boy of her father's choice.

Cioaba died of a heart attack while on holiday in Turkey last week, and received the sendoff worthy of a royal.

His body was carried in an air-conditioned glass covered coffin down a four mile route in Sibiu, Transylvania.

A banner emblazoned with his crowned visage was draped across an apartment building in his hometown. Stonemasons have been carving his tomb in black marble for the last week.

‘He cared very much about his Roma community and he helped it a lot. He integrated it into Romanian society, he sent the members of the community to school,’ his relative Ion Rudaru said.

Cioaba himself took over the mantle in 1997 from his father Ion Cioaba, who was deported during the Holocaust to the Soviet Union.

Roma sociologist Ciprian Necula described Cioaba as a moderate leader and a mediator who used his pulpit to deliver many of his messages, including urging Roma not to beg on the streets, calling on them to wait until age 16 to be married and demanding more rights for the minority.

‘When I greeted him “I kiss your hand, Your Majesty,” he replied, “Stop that nonsense!”,’ Necula said Friday.

Cioaba was strongly influenced in his policies by his wife, Marica, whom he married when they were both 14 and with whom he had four children, Necula added.

He could be critical of European leaders, including former French President Nicolas Sarkozy whom he denounced for repatriating Romanian Roma from France.

There are officially some 620,000 Roma in Romania, but many do not declare their ethnicity due to widespread discrimination. Roma leaders say there are between one and three million Roma in the country.