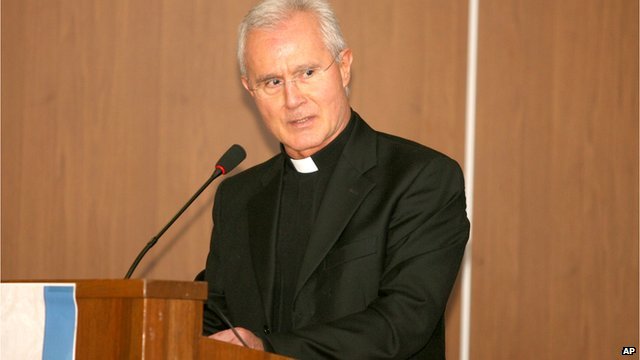 A priest has been arrested on suspicion of fraud and corruption in connection with the sweeping probe of the scandal-plagued Vatican bank, Italian media reported Friday.

Monsignor Nunzio Scarano, a priest from Salerno, was arrested after an investigation into the Institute for Works of Religion (IOR), as the bank is known, unearthed a suspected international fraud scheme, reports said.

The priest was suspended from his position as a member of the administration that manages the Vatican’s assets (the APSA) “about a month ago, after his superiors learnt about an investigation into his activities,” Vatican spokesman Federico Lombardi said.

Scarano was arrested along with a former member of the Italian secret services and a financier for allegedly plotting to illegally move 20 million euros ($26 million) from Switzerland to Italy.

The money allegedly belonged to friends of Scarano and was brought into Italy on board a private jet belonging to the former secret service agent, Giovanni Maria Zito, the reports said.

According to the daily La Repubblica, Scarano is also under investigation by the Salerno prosecutor on suspicion of money laundering.

“They called him Monsignor 500… because of the great number of 500 euro notes he had at his disposition,” which he allegedly used to launder money for friends in southern Italy, the daily said.

It added that it was an initial investigation into Scarano’s bank account at the IOR which led to the discovery of the suspected racket.