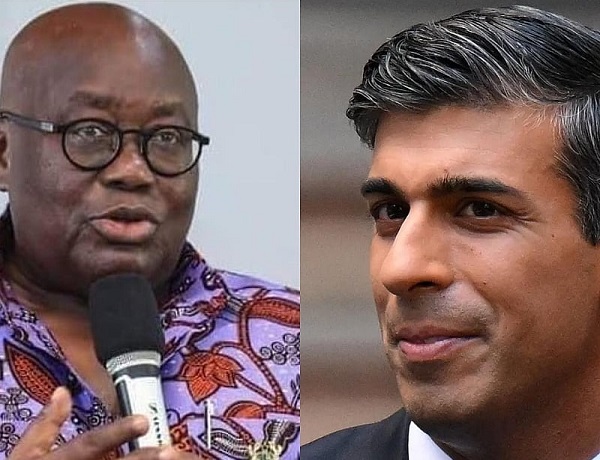 In a series of tweets, President Akufo-Addo said he was hopeful that Sunak's tenure of office will strengthen and deepen even further the ties between Ghana and Great Britain.

He posted: "Warm congratulations to Rt. Hon. Rishi Sunak, MP, (@RishiSunak) on becoming the 57th British Prime Minister in this difficult period of his country’s and the world’s fortunes.

"I am hopeful that his tenure of office will strengthen and deepen even further the ties of cooperation, collaboration and friendship between Ghana and Great Britain, and provide us with the platform to create progress and prosperity for our respective peoples.

"Congratulations, once again, and best wishes for his and his country’s success".


Mr Sunak, 42, is the UK's first British Asian prime minister and the youngest in more than 200 years.

His wife is Akshata Murty, the daughter of Indian billionaire Narayana Murthy. Mr Sunak himself has worked for investment bank Goldman Sachs and at two hedge funds. The Sunday Times Rich List estimates the couple's fortune to be worth about £730m. They have two daughters.

What other world leaders said

"As you become UK PM, I look forward to working closely together on global issues, and implementing Roadmap 2030," Indian Prime Minister Narendra Modi tweeted, referring to a framework agreement struck between the two countries. "Special Diwali wishes to the 'living bridge' of UK Indians, as we transform our historic ties into a modern partnership."

European Council President Charles Michel said: "Working together is the only way to face common challenges... and bringing stability is key to overcoming them."

Irish PM Micheál Martin said he looked forward to working with Mr Sunak, "on the important issues we face on these islands and globally".

At a White House event to mark the Hindu holiday of Diwali, US President Joe Biden described Mr Sunak's nomination as the UK's next prime minister a "ground-breaking milestone".

China wants to "advance ties with the UK" under Sunak, Foreign Ministry spokesman Wang Wenbin said. He added: "We hope that we can work with the UK side on the basis of mutual respect and win-win co-operation and advance China-UK relations along the right track."

Ukranian President Volodymyr Zelenskyy tweeted his congratulations to Mr Sunak. "I wish you to successfully overcome all the challenges facing British society and the whole world today. I'm ready to continue strengthening the Ukraine-UK strategic partnership together!" he said. Oleksandr Kornienko, the First Deputy Chairman of Ukraine's parliament, said he welcomed Mr Sunak as a "colleague". He added: "Congratulations to the people of Great Britain on the fact that they have political stability again. After a short stage of turbulence."

Australian Treasurer Jim Chalmers called Mr Sunak a great friend of Australia. "I don't think it's insignificant a country like the United Kingdom has its first prime minister of colour," he said.