One killed, several wounded in gunfire near Beirut protest 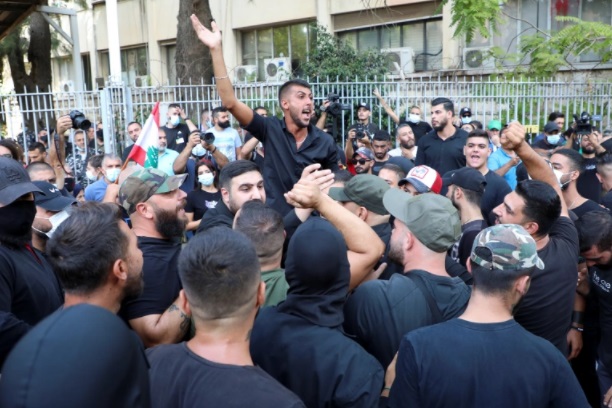 Supporters of Lebanese groups Hezbollah and Amal and the Marada movement take part in a protest against Tarek Bitar, the lead judge of the port blast investigation, near the Justice Palace in Beirut [Mohamed Azakir/Reuters]

Beirut, Lebanon – At least one person has been killed and several others wounded when gunfire erupted near a Hezbollah-led protest in Beirut.

Hundreds of Hezbollah supporters and allies wearing black gathered at the Beirut Justice Palace on Thursday calling for the removal of Judge Tarek Bitar from the Beirut Port explosion probe, accusing him of being biased and an “American slave”.

Gunfire was heard from building rooftops in the nearby Tayyoune neighbourhood, scattering the angry protesters.

At least one person died and eight others were wounded, a source at the Sahel General Hospital in Beirut told Al Jazeera.

Mehieddine Lazkani, a 29-year-old who lost his father in the blast, said he was appalled that the protesters were rallying against Bitar, rather than the country’s rulers, as Lebanon’s economy continues to spiral.

“It’s scandalous in every sense of the word,” Lazkani told Al Jazeera. “The Lebanese pound is at 21,000 to the dollar, there is no electricity nor medicine, yet they think they should protest and replace Judge Bitar?”

The Lebanese pound has lost 90 percent of its value in two years, while an electricity crisis has paralysed public life. About three-quarters of the population live in poverty, according to the UN. Much of the Lebanese population blames the crisis on the rampant corruption and financial mismanagement of Lebanon’s ruling parties and banks.

The judge has also asked to summon General Security chief Major-General Abbas Ibrahim and State Security head, Major-General Tony Saliba. However, the interior ministry and Higher Defense Council did not grant him permission to do so.

Khalil and Zeiter issued a legal complaint on Tuesday, which forced Bitar to temporarily suspend the investigation moments after issuing an arrest warrant for Khalil. The European Union and United States State Department called for the investigation to resume without obstruction.

More than 200 people were killed and more than 6,500 wounded in the explosion at Beirut’s port on August 4, 2020, when a huge stockpile of ammonium nitrate, which had been stored unsafely at the port for years, detonated.

The blast was one of the largest non-nuclear explosions ever recorded, and the most destructive single incident in Lebanon’s troubled history. Entire neighbourhoods of the country’s capital were destroyed.

No officials have been convicted.

However, ministers belonging to Hezbollah, Amal, and some allies have reportedly pressured the Cabinet to take a formal position against Bitar.