Nigerian volunteer: 'Fighting in Ukraine is better than living here' 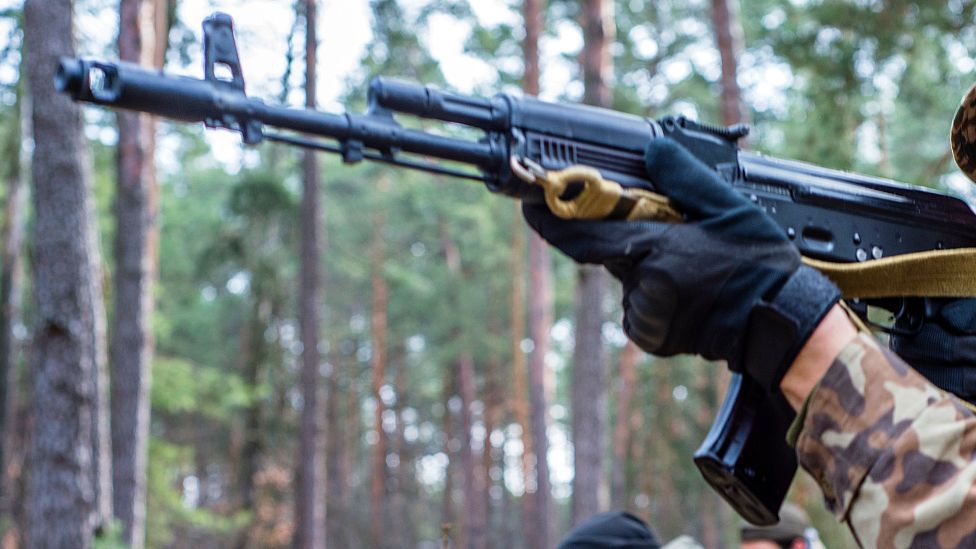 He picked up his phone and tweeted: "I want to join the team."

The philosophy graduate is one of several hundred Africans, from countries like Nigeria, Kenya, Senegal, South Africa and Algeria, who say they are willing to take up arms in the battle against Russia, partly to escape the bleak prospects faced by many young men at home.

"We know that it's war, it's not child's play," he told the BBC. "But being a soldier in Ukraine would be better than being here.

"I'll probably be allowed to stay if the war ends, plus I'll be a hero and fight an undeniable enemy."

Some 20,000 volunteers from across the world have reportedly enlisted after Ukraine's President Volodmyr Zelensky made a global appeal for foreign fighters to "come and stand shoulder to shoulder with Ukrainians".

The government has temporarily axed its visa requirements and offered equipment and a salary to those with a valid passport and military training. There has been no official confirmation that foreign fighters will be allowed to stay in the country after the war.

Kereti Usoroh, a Nigerian living in the capital, Abuja, said his motivations for volunteering had nothing to do with financial gain or the prospect of citizenship.

"I already live a comfortable life. If I wanted to go to Europe, I'd do it through education, not war," the 29-year-old lawyer said.

Sentiments to gladden the hearts of Ukrainian diplomats and days after President Zelenksy's appeal, dozens of hopeful volunteers headed to the Ukrainian embassy in Abuja, with ambitions of enlisting.

But the Ukrainian embassy in Nigeria - like others in Africa - has had to back-pedal as many of the continent's governments do not want their nationals to fight in Ukraine.

"Nigeria discourages the use of mercenaries anywhere in the world and will not tolerate the recruitment," Nigeria's foreign ministry wrote in a statement.

Bohdan Soltys, a Ukrainian embassy official in Nigeria, said they were not paying Africans to fight - and people would have to pay for their own flights to reach Europe.

"There's a fine line between foreign volunteers and mercenaries," he told the BBC.

He later clarified that he had been instructed to turn away any volunteers who arrived at the embassy.

Senegal also warned its citizens against enlisting in the war and ordered the Ukrainian ambassador to take down a Facebook post that had called for Senegalese volunteers, calling the recruitment effort "illegal and punishable by law."

The Algerian foreign ministry issued a similar order to its Ukrainian embassy.

"My country says I'm not allowed to go. I tried writing to the foreign ministry. They didn't answer me, but I will try again," 28-year-old Algerian Belhadj Hani Amir told the BBC.

"I want to go to Ukraine, but I also hope this war ends as soon as possible."

Ukraine's ambassador to South Africa, Mozambique and Botswana Liubov Abravitova told the BBC that hundreds of people from across southern African had volunteered to fight or work in a humanitarian capacity - but she was unable to act on their requests as she was waiting for instructions from their governments. South Africa has a strict law against mercenaries.

In fact, Ukraine's official website for recruiting the "international legion" of volunteers, which provides the contact details of local embassies around the world, no longer includes missions in African countries.

A representative working for the website confirmed that some African countries were removed because of "regulatory restrictions".

Algeria, Senegal and South Africa were among 17 of Africa's 54 countries that abstained from the vote at the UN to condemn the invasion of Ukraine, as they wanted to avoid antagonising Russia.

And Russia it not without support in Africa. It has expanded its influence on the continent - especially militarily, by helping countries like the Central African Republic (CAR), Libya, Mali and Sudan fight rebels or Islamist militants.

A video purporting to show soldiers from CAR vowing to join their "Russian brothers" has also been circulating online, though the BBC could not independently verify the source and a government official has not responded to a request for comment.

Last Friday, Russian Defence Minister Sergei Shoigu said that "over 16,000 fighters" from the Middle East had volunteered to fight with the Russian army - it is not clear if this includes any from North Africa.

But with African governments clamping down on the recruitment of their own citizens, it is unclear if any of the men will make it to the front line - and a Ukrainian official in charge of registering foreign volunteers told the BBC that no Africans had arrived.

For some, like David Osagie Adeleke from Nigeria's south-western Oyo state, this was a devastating blow.

The 21-year-old, who has worked as an emergency rescue worker for the Red Cross, had been preparing to enlist as a combatant, having collected the necessary documentation, including a letter of recommendation.

"I went straight to the police station to collect my documents," he said, explaining that a clean criminal record was one of the requirements for enlisting.

"I'm disappointed to hear that the embassy is now saying it won't take us Africans."

With his emails to the Ukrainian embassy now bouncing back, he is looking into alternative routes to get to the country's border.

"I've got an interview with the Polish embassy in Nigeria," he said.

Prince Nkem Nduche, who was among those at the Ukrainian embassy in Abuja, has more knowledge than most about the situation in Ukraine and is more sanguine.

He actually spent some time in Russia as a youngster, has dual citizenship and even enrolled at Russia's military academy - but was jailed for a short time, accused of being a spy after he was spotted at the American embassy.

He said he fled the country seven years ago, via Ukraine - and would happily fight against Russia, but accepts it is not to be.

"I wanted to go on my own but as the Nigerian government said we can't go… I will obey them," he told the BBC.