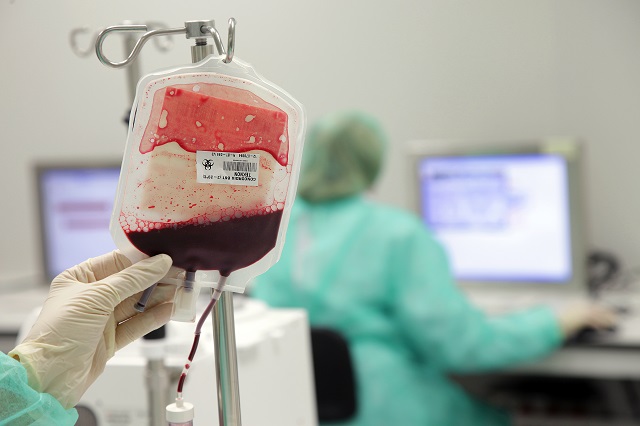 The Director-General of the Nigeria Blood Services Commission, Dr Omale Joseph, has alleged that many Nigerian hospitals are giving expired blood to patients.

He also said that many are selling blood donated to them by individuals to keep in the blood bank for use when necessary.

Omale made the disclosure, Thursday evening, while briefing journalists in the House of Representatives on the heels of the establishment of a new Commission aided by a Bill sponsored by the APC member for Kaduna, Abbas Tajudeen, recently signed into law by President Muhammadu Buhari.

Responding to questions on the need to inject sanity into the process of blood handling, utilisation and administration in Nigeria, the DG said that many officials in hospitals were cutting corners in the blood administration.

According to him, safe blood has a lifespan of 35 days after which it becomes unsafe to use.

He also stated that some individuals now commercialise blood, donating it for fees ranging from N20,000.

He however said that the new Commission was out to stop the inhuman practices.

Omale also said that blood banks and centres will be established in the 36 states and local governments in the country to save lives in the hinterlands.

He said a unit of blood once taken out expires between 30 and 35 days and that if it is not transfused within that period and it gets to 35 days, it has to be thrown away. "But people still keep them in their fridge and transfuse them.

“Based on the act we have now, we are trying to ensure, working on our people to make sure that at each point in time, Nigeria has a minimum of safe blood place.

“And this blood, we are going to warehouse them in the 6 geopolitical zones with additional Port Harcourt, Lagos, and Kano so that any part of the country where blood is required in large quantity, we can always mobilize from that centre to where it is needed. There is no need to say we don’t have blood.

“Another area the Act would help is the issue of increasing the outlets where people can get blood.

“For example, you rarely get blood banks outside major hospitals. Most of the states are only making do with only one or two blood banks.

“The establishment of the commission would ensure that not only state governments and their big tertiary hospitals would have blood banks, but every local government should have at least a blood bank, so that people in need would be able to access it easily and cheaply.”

Omale also appealed to Nigerians to cultivate the culture of donating blood to help them rejuvenate.

“Blood donation is necessary to keep one healthy. Once you donate blood, new cells come up to replenish the one you’ve donated, because blood produced by the body expires over time and is reabsorbed by the body.

“But when removed from the body through donation, it gives room for new blood cells which makes the donor more healthy”, he said.

Speaking earlier, the sponsor of the Bill, Tajudeen Abas who led the DG and his team to the House Media Centre disclosed that President Buhari has assented to the bill to establish the National Blood Services Commission.

“The president has assented to the bill for the establishment of the Nigerian Blood Service Commission.

“It is a very important milestone achieved in the medical sector of this country. Before the ascent of the president, the industry had been fragmented. It had been to a great extent, unregulated and not too coordinated and because of that a lot of things are happening.

“Some of them was that the blood sold are not of the right quality and the recipient of some types of blood instead of getting cured for what they were given would end up having some other kind of diseases.

“We believe that such kind of paucity of donations of blood is partially so because there has not been an enabling environment and enabling act that would give the agency responsible to go out and look for donors.

“At the same time, that survey further revealed thag of the 0.5 million pints that we are able to get, only 25 per cent of it is coming through voluntary sources.

“75 per cent of it is commercialized. So people would come to give their blood and you pay them. And you know the implication of those who are giving their blood for payment. It means the recipient at the end of the day would also be made to pay much more,” the lawmaker said.