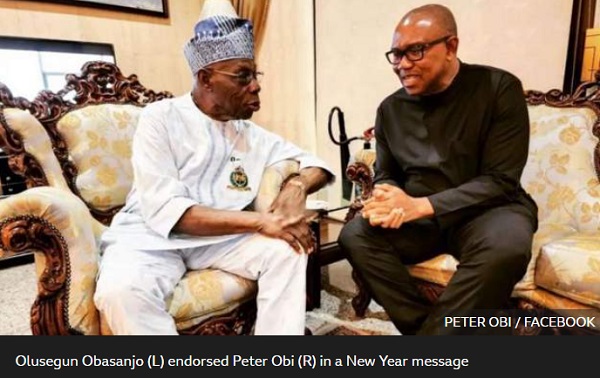 Nigeria's former President Olusegun Obasanjo is at the centre of a political storm after endorsing opposition presidential hopeful Peter Obi ahead of the general election due next month.

In his endorsement, Mr Obasanjo described Mr Obi of Labour Party as a "mentee" who had an "edge over other candidates".

He also described the West African country's current state of affairs as having "moved from [the] frying pan into [the] fire and from the mountain top to the valley".

Mr Obasanjo governed Nigeria between 1999 and 2007 as the flag bearer for the now main opposition PDP party. But he has since distanced himself from the party.

In an angry response, President Muhammadu Buhari's office said the former leader was "being jealous" and represented the "dark days of Nigeria’s democracy".

The former president thinks "he is the best ever to lead Nigeria and there will never be another one better than him", a statement from a presidential aide said.

Peter Obi is seen as one of the three main contenders. The others are Bola Ahmed Tinubu of the governng APC and Abubakar Atiku of the opposition PDP.

Local outlets quote Mr Tinubu's campaign as saying that their candidate "will not lose sleep" over Mr Obasanjo’s endorsement, while Mr Atiku's camp said the "endorsement of an individual no matter how highly placed does not translate to victory at the polls".

Campaigns have intensified ahead of the general elections.