Niger heads for second round of Presidential polls 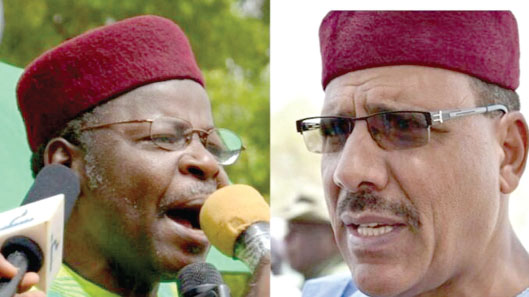 Almost 7.5 million people in Niger are expected to cast their vote in a run-off Sunday.

During the first election on December 27, 2020, none of the 30 validated candidates for the election secured a majority of the votes and this pushed the election into a run-off where the two front runners are in contention.

The Presidential run-off is between Mohamed Bazoum from the ruling Nigerien Party for Democracy and Socialism (PNDS) and former President Mahamane Ousmane of the Renewed Democratic and Republican Party.

Niger’s President Mahamadou Issoufou is stepping down after serving two five-year terms, which will lead to the country’s first transfer of democratic power.

In an era where some African leaders had changed their country’s Constitution to enable them to run for third, fourth and sixth terms of office, incumbent President Mahamadou Issoufou is not standing for re-election as he has already served his two terms.

Bazoum led the first round of the election with 39.33 per cent of the vote, falling short of the stipulated 50 per cent needed to win outright, while his closest contender, former President Ousmane polled 17 per cent.

Former Prime Ministers Seini Oumarou and Albade Abouba respectively came third and fourth with 8.95 per cent and 7.07 per cent of the ballots.

Already, results of the parliamentary elections in December last year showed the ruling PNDS leading with 80 seats, while the main opposition MODEN/FA-Lumana was second with 19 seats and five diaspora seats remaining to be decided in the 170 member legislature.

The 60-year-old former Interior and foreign Minister, Mohamed Bazoum is President Issoufou’s handpicked successor and is the favourite candidate in the race and has vowed to continue the incumbent's policies to combat Islamist violence and end poverty.

He has even called his policy platform Renaissance 3, named after Issoufou’s Renaissance 1 and Renaissance 2 governing agendas,“We are going to consolidate the gains of the past 10 years,”

“We are going to continue in the direction set by President Mahamadou Issoufou,” he is quoted as saying.

Mahamane Ousmane was elected President of the Republic of Niger in the first democratic election on March 27, 1993.

After several months of social tensions, he was overthrown in a coup d'état led by Colonel Ibrahim Baré Mainassara in January 1996.

He is the candidate of the Renewed Democratic and Republican Party.

Bazoum and Ousmane must for the second round engage in negotiations with the 28 other candidates to win the election.

Eighteen out of the 28 opposition parties, including that of former President Ousmane, have formed a coalition named Cap 20-21, signifying the 2020 election and the run-off in 2020 and has called on the rest to throw their support to the former President.

Meanwhile, the 10 other unsuccessful candidates in the first round, including former President Salou Djibo have also formed a second alliance, the Alliance of Candidates for Change (ACC), offering their support in the second round "to any interested candidate", in return for power-sharing afterwards. The cumulated score of the ACC candidates does not exceed 10 per cent.

Five years of violence in the former French colony has cost hundreds of lives with many more displaced. Earlier in February, 27 people died in an attack claimed by Boko Haram. But security is not the only concern for the people in Niger, a country of 23 million people.

The country’s economy has been hit hard by the COVID-19 pandemic, with a fall in the price of its top export, uranium. It has also suffered due to the closure of the border with Nigeria, a key gateway for the import of essential goods.

The outcome of the election will witness the first transfer of power between two democratically elected Presidents since Niger gained independence from France in 1960. The country had experienced four coup d’ tats in its history.

Whoever wins the election will inherit several challenges, including rising violence from Islamist militants linked to al Qaeda and Islamic State. Attacks near the western border with Mali and Burkina Faso and the southeastern border with Nigeria which killed hundreds of people last year.

Over the past year, hundreds of Nigerien soldiers and civilians have been killed in attacks.Tackling poverty will also be another challenge as in 2019, more than 40 per cent of the population lived in extreme poverty, according to the World Bank.