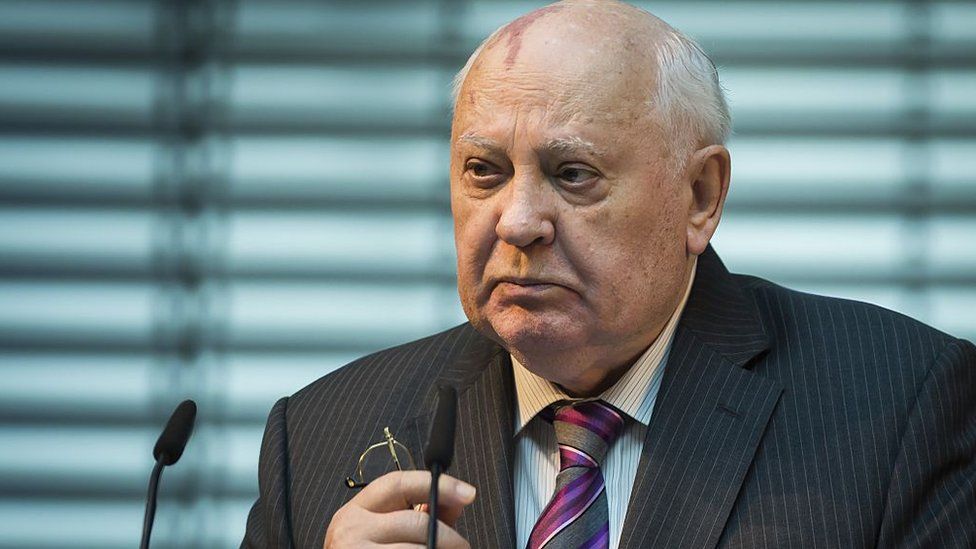 Mikhail Gorbachev was widely acclaimed in the West, but reviled by many at home
30.5k Shares

Mikhail Gorbachev, the former Soviet leader who brought the Cold War to a peaceful end, has died aged 91.

Mr Gorbachev, who took power in 1985, opened up the Soviet Union to the world and introduced a set of reforms at home.

But he was unable to prevent the slow collapse of the Soviet Union, from which modern Russia emerged.

Tributes have been paid worldwide, with UN chief António Guterres saying he "changed the course of history".

The hospital in Moscow where he died said he had been suffering from a long and serious illness.

In recent years his health has been in decline and he had been in and out of hospital. In June, international media reported that he had been admitted after suffering from a kidney ailment, though his cause of death has not been announced.

US President Joe Biden called him a "rare leader" and praised Mr Gorbachev as a unique politician who had the "imagination to see that a different future was possible" amid the tensions of the Cold War.

European Commission President Ursula von der Leyen praised him as a "trusted and respected leader" who "opened the way for a free Europe".

"This legacy is one we will not forget," she added.

UK Prime Minister Boris Johnson said he admired Mr Gorbachev's courage and integrity, adding: "In a time of Putin's aggression in Ukraine, his tireless commitment to opening up Soviet society remains an example to us all."

Mr Gorbachev became general secretary of the Soviet Communist Party, and de facto leader of the country, in 1985.

At the time, he was 54 - the youngest member of the ruling council known as the Politburo, and was seen as a breath of fresh air after several ageing leaders. His predecessor, Konstantin Chernenko, had died aged 73 after just over a year in office.

Few leaders have had such a profound effect on the global order, but Mr Gorbachev did not come to power seeking to end the Soviet grip over eastern Europe. Rather, he hoped to revitalise its society.

The Soviet economy had been struggling for years to keep up with the US and his policy of Perestroika sought to introduce some market-like reforms to the state run system.

Internationally he reached arms control deals with the US, refused to intervene when eastern European nations rose up against their Communist rulers and ended the bloody Soviet war in Afghanistan that had raged since 1979.

Meanwhile, his policy of glasnost, or openness, allowed people to criticise the government in a way which had been previously unthinkable.

But it also unleashed nationalist sentiments in many regions of the country which eventually undermined the stability of the country and led to its collapse.

In 1991, after a shambolically organised coup by communist hardliners failed, Mr Gorbachev agreed to dissolve the Soviet Union and left office.

He is seen in the West as an architect of reform who created the conditions for the end of the Cold War in 1991 - a time of deep tensions between the Soviet Union and Western nations, including the US and Britain.

He was awarded the Nobel Peace Prize in 1990 "for the leading role he played in the radical changes in East-West relations".

But in the new Russia that emerged after 1991 he has been on the fringes of politics, focusing on educational and humanitarian projects.

Mr Gorbachev made one ill-fated attempt to return to political life in 1996, receiving just 0.5% of the vote in presidential elections.

His divisive legacy is reflected in the tributes that followed his death.

Henry Kissinger, who served as US Secretary of State under President Richard Nixon, told the BBC's Newsnight programme that Mr Gorbachev would be "remembered in history as a man who started historic transformations that were to the benefit of mankind and to the Russian people".

James Baker, who negotiated the reunification of Germany with Mr Gorbachev's government, told the New York Times that "history will remember Mikhail Gorbachev as a giant who steered his great nation towards democracy".

But many Russians never forgave him for the turmoil that followed the collapse of the USSR.

Vladimir Rogov, a Russian-appointed official in occupied Ukraine, said Mr Gorbachev had "deliberately led the (Soviet) Union to its demise" and called him a traitor.

He will be buried in Moscow's Novodevichy cemetery, the resting place of many prominent Russians, next to his wife Raisa who died of leukaemia in 1999, Tass news agency said.