Man who kidnapped three women 'may be executed' 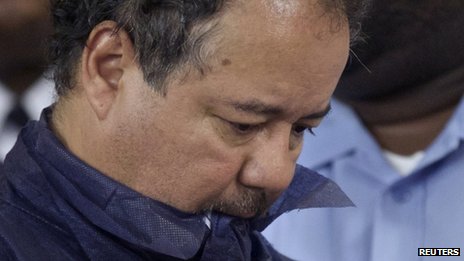 Ohio prosecutors have said they plan to seek aggravated murder charges that could carry the death penalty, against the man suspected of imprisoning three women for about a decade.

The charges relate to alleged forced miscarriages suffered by one victim.

Ariel Castro, 52, was arraigned in court earlier for the kidnap and rape of Amanda Berry, 27, Gina DeJesus, 23 and Michelle Knight, 32.

Ms Berry escaped on Monday and was able to raise the alarm.

Cuyahoga County prosecutor Tim McGinty said the murder charges were based on evidence from one of the women held captive in Mr Castro's house that he had impregnated her, then physically abused and starved her in order to induce miscarriages

"I fully intend to seek charges for each and every act of sexual violence, rape, each day of kidnapping, every felonious assault, all his attempted murders, and each act of aggravated murder he committed by terminating pregnancies that the offender perpetuated against the hostages during this decade-long ordeal," Mr McGinty told a news conference.

"My office will also engage in a formal process in which we evaluate to seek charges eligible for the death penalty.

"This child kidnapper operated a torture chamber and private prison in the heart of our city," he added.

Earlier on Thursday, Mr Castro appeared in court in Cleveland, handcuffed and dressed in blue overalls. He did not enter a plea.

He is charged with four counts of kidnapping, covering the three initial abduction victims and Jocelyn, Ms Berry's six-year-old daughter, who was apparently conceived and born in captivity.

The former school bus driver also faces three counts of rape, one against each woman.'Disappointed, embarrassed'

He has been placed on suicide watch and will be kept in isolation, his court-appointed lawyer Kathleen DeMetz told reporters.

According to CBS News, Mr Castro confessed to his crimes in a long, hand-written letter, apparently a suicide note that was found in the house.

In the letter he said he had been raped as a child by a relative, a law enforcement source told the US network.

Ariel Castro's two brothers, Pedro and Onil, also appeared in court on unrelated charges. They had been arrested, but police found no evidence linking them to the crime.

Pedro Castro was fined $100 for public drinking, while two minor counts against Onil Castro were dropped.

On Thursday, Mr Castro's daughter, Arlene, who was one of the last people to see Gina DeJesus before she disappeared in 2004 aged 14, wept during a TV interview.

Describing herself as "disappointed, embarrassed, mainly devastated", she apologised to Ms DeJesus.

The three women were all abducted after accepting rides from Mr Castro, according to a leaked police report.

They told officials they could only remember being outside twice during their time in captivity.

Cleveland City Councilman Brian Cummins said the women had told police they had only gone as far as a garage on the property, disguised in wigs and hats.

Mr Cummins, citing police information, said the victims had been kept apart inside the house until their captor felt he had enough control to allow them to mingle.

Ms Berry, whose disappearance in 2003 the day before her 17th birthday was widely publicised in the local media, returned to her sister's home on Wednesday.

A few hours later, Gina DeJesus, who went missing in 2004 at the age of 14, was also brought home.

Ms Knight, who was 20 when she disappeared in 2002, remains in hospital in a good condition.