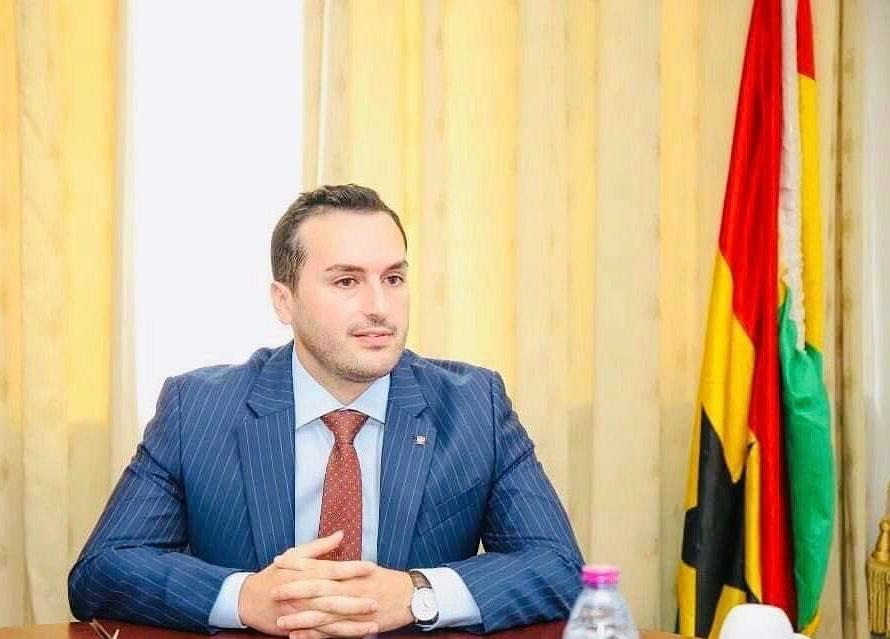 On the occasion of the 56th Independence Anniversary of Malta (Malta Day), which was celebrated on Monday, September 21, the Maltese High Commissioner to Ghana, Jean Claude Galea Mallia shed more light on the growing bilateral relations between Ghana and Malta.

Below is the full interview with the Daily Graphic:

My name is Jean-Claude Galea Mallia, and I’m the High Commissioner of Malta to Ghana. In a nutshell, my job and that of the team at the High Commission is to look for opportunities that would foster political, economic, cultural and trade exchanges between the two countries and their People. I have also recently taken the role of a married man, which also requires a high level of diplomatic skill!

2. Kindly tell the Daily Graphic a little about Malta.

Malta is an island-state located in a strategic position at the centre of the Mediterranean. Despite its small size, the Maltese archipelago has played a vital role in the history of Europe and that of the Mediterranean as well as in the interplay between the emerging cultures of Europe and the older cultures of Africa and the Middle East.
Maltese society was moulded by centuries of foreign rule by various powers, including the Phoenicians, Romans, Greeks, Arabs, Normans, Sicilians, Aragonese, the Knights Hospitallers, the French and finally the British.

Malta got its independence from the British in 1964, seven years after Ghana and has been an active member of the Commonwealth since then. Malta eventually joined the European Union in 2004 and the Eurozone in 2008. Our official languages are English and Maltese.
Malta boasts of an innovation-driven economy that is highly dependent on foreign trade, manufacturing (especially electronics and pharmaceuticals), tourism and financial services. Malta, supported by a strong labour economy, has put a lot of hard work into promoting services and succeeded in becoming one of the main service centres in the Mediterranean region.

3. How long has the Maltese High Commission been in Africa and for that matter, Ghana; and what are your views on the country so far?

We have been in operation for a little over a year and a half, though the journey started earlier than that. This is our first Diplomatic Mission in Sub-Saharan Africa, which stands to show our commitment and trust in Ghana as a beacon of stability and democracy in the region. As I was saying, it is particularly interesting to see how all these events occurred in such a short span of time leading to the current momentum.

Following the successful State Visit of Former President of Malta, Marie-Louise Coleiro Preca in 2017, who was accompanied by former Foreign Minister Hon. Carmelo Abela, the importance of having a Mission in Accra was seriously acknowledged. The State Visit to Ghana was then reciprocated when the President of Ghana, H.E. Nana Dankwa Akufo-Addo, visited Malta in early 2019.

Having lived in Ghana for more than 11 years has enabled me to truly appreciate what Ghana stands for. Both Malta’s and Ghana’s economies rely heavily on foreign trade and commercial partnerships and both share a record of having the fastest growing economies in their respective regions. With its rich natural resources, youthful and vibrant workforce and sound economic policies, Ghana has the potential to grow further and attract meaningful investment that would boost the industrialisation and overall development of the country.

4. What are the main reasons for setting up a new High Commission in Ghana?

Malta views the African continent a strategic partner that is growing in strength and influence in international affairs. Ghana was picked as the destination for the opening of the first Maltese diplomatic mission in Sub-Saharan Africa for various reasons: mainly, its track record as a flourishing democracy as well as for its stable macro-economic environment and vibrant business community, which altogether make it an ideal destination for companies that want to explore new markets in Africa.

The objective of the Government of Malta is to have an efficient network of diplomatic missions across Africa. In fact, the Ministry of Foreign and European Affairs has also recently appointed a non-resident Ambassador to Ethiopia, who is also the Ambassador to the African Union and a non-resident High Commissioner to South Africa.

From a commercial perspective, Ghana is an important partner to Malta as well as to the European Union and both sides stand to benefit from closer cooperation. Malta supports Ghana’s vision towards Pan-Africanism and fully shares the belief that “unity would make Africa stronger”. With the secretariat of the AfCFTA being hosted by Ghana, the country will continue to play a key role in pushing the ideas of regionalism, free trade and free movement as a solution to various common challenges faced by African countries.

Furthermore, Trade Malta – the trade promotion organisation that offers assistance to Malta-based businesses on their journey to internationalization – supports Maltese companies in establishing themselves within new foreign markets including Ghana. To this date, we had two successful business delegations to Ghana with a number of Agreements and Memoranda of Understanding signed to facilitate cooperation and exchanges. This includes a Double Taxation Agreement and an MoU between the Malta Chamber of Commerce and the Ghana National Chamber of Commerce and Industry.

Facilitating people-to-people connections is at the heart of our Mission and is in line with the commitments made by European and African leaders at the Valletta Summit in 2015. The government of Malta puts extra focus on educational and academic exchanges between the two countries in various fields. For example, yearly post-graduate scholarships are awarded by the University of Malta in the field of diplomatic studies, maritime law and sciences (STEM).

In addition to exchanges between students and academics, the High Commission is also facilitating regular exchanges between Maltese and Ghanaian authorities most particularly in the area of standardisation. A case in point, is the cooperation that is ongoing between the Ghana Standards Authority and Ghana Food and Drugs Authority and the Malta Medicines Authority, with the ultimate objective of increasing the quality and reliability of food and medicinal products manufactured in Ghana, in line with European standards.

Every year, PhD courses that include an internship within the Maltese Medicines Authority are also being offered to Ghanaian professionals to increase their capacity and know-how in the field of standardisation.

In addition to the above, the High Commission also facilitates exchanges between business incubators and start-ups, while providing them with sound advice and recommendations to help them understand the Ghanaian business context. We have noticed that since the establishment of the High Commission of Malta in Ghana, more Maltese companies have been exploring commercial opportunities in Ghana.

The opportunities for cooperation are endless and our aim is to continue building on the successes we have had so far.

6. Malta Day Celebration, what is the significance of the day for Malta?

Malta Day is a celebration of Malta’s Independence from British Rule, which took place on 21st September 1964. On this important day, Malta was given full independence in accordance with the Malta Independence Act and a newly created Constitution.

7. What activities, if any, were held to mark Malta Day 2020 in Ghana as well as in Malta?

Regrettably, we were not able to organise a social event to celebrate our Independence, due to the COVID-19 pandemic. However, instead, we shall be promoting Malta’s presence in Ghana and the essence of Independence, which is the ability to forge mutually beneficial partnerships.
To celebrate Malta Day, we will therefore be launching a number of short video clips showcasing the ever evolving and dynamic relations between Malta and Ghana, most particularly through education and exchanges in technical expertise and know-how.

We will also be launching a weekly series of online sessions that will give the opportunity to various captains of industries in Malta and in Ghana to discuss various themes and share their unique experiences, in a very casual and informal setting.

8. How do Maltese companies view the prospect of doing business with Ghana? Are there any success stories so far?

Maltese companies have always looked beyond Maltese shores for growth. As I mentioned earlier, Ghana is increasingly being viewed as the destination of choice in sub-Saharan Africa. From the first Business Forum held in 2017 up to today, we have managed to strengthen and grow our trade relations thanks to the ongoing interaction and exchanges between the respective private and public sectors.

It is evident that the business-inducive environment and the success stories of Maltese companies in Ghana, are generating increased interest. So far, we have around 10 Maltese companies that are at various stages of setting up shop in Ghana, while 11 other companies have started trading with Ghana.

May I also add that despite the uncertainties caused by the prevailing pandemic, most companies are still committed to set up presence in Ghana once travelling is once again eased. Obviously, companies tend to be cautious when investing in new jurisdictions, therefore we view this as a long-term process and a challenge, that requires continuous effort and support from investment promotion agencies and authorities in the respective countries, such as Trade Malta in Malta and Ghanaian Authorities such as GIPC and GEPA, whose support has been key to our success so far.

9. What trade opportunities do you see for the future between Malta and Ghana?

I have always been a strong advocate of Ghana being an entry point into West Africa, therefore opportunities exist both within and beyond the territory of Ghana. With a consolidated market of 1.2 billion people, the AfCFTA has further highlighted the significance of trade with and within the African Continent.

The current administration has already launched a number of initiatives such as the 1D1F intended to boost industrialisation. Industrialisation is vital for Ghana to be able to take full advantage of the opportunities provided by the single market.

10. Any message to the people of Ghana as you celebrate Malta Day 2020?

I can’t help but to point out that Malta’s Independence Day falls on the birthday of Dr. Kwame Nkrumah, the first President and founding father of independent Ghana. On 6th March 1957, Ghana, became the first sub-Saharan African country to gain independence. For this reason, Malta views Ghana as the leader in the call for freedom from colonial rule and a staunch advocate of a strong and united Africa, a vision which Malta fully supports. It is now important for contemporaries to continue building on the solid foundations laid out by patriots like Dr. Kwame Nkrumah to make Ghana stronger for the benefit of its people.