Karzai to boycott talks with Taliban 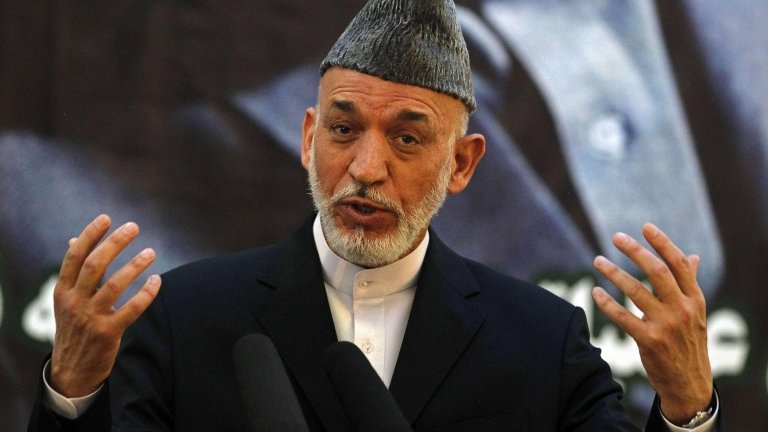 The Afghan government will not take part in peace talks with the Taliban unless the process is "Afghan-led", President Hamid Karzai has said.
The statement came a day after the US said it would talk to the Taliban, who opened a political office in Qatar.

Mr Karzai earlier suspended talks with the US on its military presence in Afghanistan after Nato leaves in 2014.

Correspondents say Mr Karzai is angry the insurgents did not commit to talk directly to the Afghan government.

A statement from his office said Afghan negotiators would stay away from the Qatar talks, which were due to start within days, until "foreign powers" allowed the process to be run by Afghans.

"Unless the peace process is 'Afghanised', the High Peace Council is not attending the Taliban Qatar talks," the statement said.

Earlier, four US soldiers died in a Taliban attack at an Afghan air base, heaping further pressure on the proposed talks.

A spokesman for the Taliban said the militants had launched two rockets at Bagram airbase, the largest military base for US troops in Afghanistan.

The attack came just hours after the US announced it would open direct talks with the insurgents at their office in the Qatari capital, Doha.

A condition for the talks was for the Taliban to renounce violence. However, US President Barack Obama did not make a ceasefire part of the preliminary negotiations.

"My hope is that despite those challenges the process will proceed," he said during an official visit to Berlin on Wednesday.

"Ultimately we're going to need to see Afghans talking to Afghans about how they can move forward and end the cycle of violence so they can start actually building their country".

"There is a contradiction between what the US government says and what it does regarding Afghanistan peace talks," the president's spokesman Aimal Faizi said.

He added that the president disagreed with the name given to the new Taliban office opened on Tuesday in the Qatari capital, Doha.

"We oppose the title the 'Islamic Emirate of Afghanistan' because such a thing doesn't exist," Mr Faizi said.

"The US was aware of the president's stance."

The announcement comes a day after Nato handed over the security for the whole of the country to the Afghan government for the first time since the Taliban were ousted in 2001.

The BBC's Bilal Sarwary says President Karzai has been reluctant to sign a long-term agreement with the US amid fears it would undermine Afghan sovereignty - and how it might reflect on him during his remaining time in office.
'Puppets of Washington'

US officials told reporters on Tuesday that the first formal meeting between US and Taliban representatives was expected to take place in Doha on Thursday.

On the same day, President Karzai said he also intended to send delegates of Afghanistan's High Peace Council (HPC) to Doha to engage in talks with the Taliban in the coming days.

In the past, the Taliban have always refused to meet President Karzai or his government, dismissing them as puppets of Washington. But on Tuesday the insurgents said they would meet Afghans, suggesting they might meet HPC negotiators.

Mr Karzai has expressed anger at previous US and Qatari efforts to kick-start the peace process without properly consulting his government, correspondents say.

There is also concern within the presidential palace that the Taliban will use the office in Qatar to raise funds.

The US met the Taliban secretly in 2011 in Qatar, but these would be the first open talks.

In March 2012 the Taliban said it had suspended preliminary negotiations with Washington, citing US efforts to involve the Afghan government as a key stumbling block.

The Taliban set up a diplomatic presence in Qatar in January 2012 and US officials held preliminary discussions there.