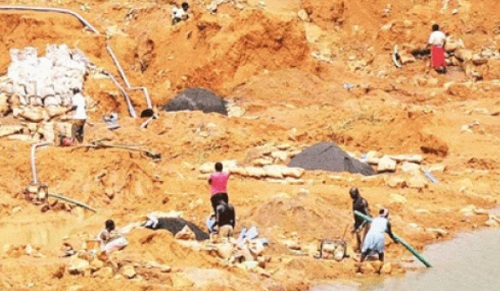 A Ghanaian national has been arrested for engaging in illegal mining in Nigeria.

The Guardian newspaper reports that the Ghanaian was arrested along with 10 Chinese nationals and three Nigerians during a raid on four illegal mining sites in the Osun State.

The raided sites were Itagunmodi, Igun, and Ariye I & II, all in Atakunmosa-West Local Government Area of the State. The raid followed a tip-off by members of the public. The operation which lasted about two hours was carried out at all the illegal mining sites in the council area.

Speaking with journalists after the operation, the Director-General, Amotekun Corps in the state, Amitolu Shittu, said the operation was part of the state government resolve to clear the state of economic saboteurs.

He added that the Joint Task Force (JTF) was inaugurated to free the state of criminal activities, including kidnapping and illegal mining across the state, saying Governor Adegboyega Oyetola is committed to his pledge.