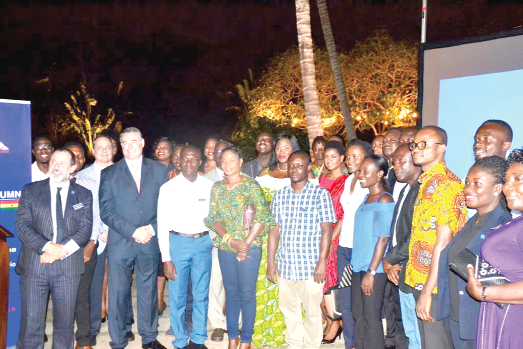 Mr Francois Pujolas (2nd left), French Ambassador with some of the alumni at the launch
30.5k Shares

The France Alumni Ghana Platform, an online social and professional network that will bring together all Ghanaians who have previously studied in France in any discipline, has been officially launched in Accra.

There are already about 250 members and it is expected that about 800 more alumni would join the network soon.

In addition to this platform, an alumni association will be created in the very near future, with the support of the French Embassy to organise and animate the network.

Launching the France Ghana Alumni Platform, the Ambassador of France to Ghana, Mr Francois Pujolas, said the network was a gateway to a vast range of opportunities in line with the strengthening of ties between France and Ghana.

He said it would also facilitate connections among alumni and serve as a hub for Ghanaian and French corporations to harness the skills of alumni in the professional space.

Mr Pujolas noted that France had a significant reputation of industrial excellence, with more than 25 international corporations being the leaders in their respective fields from aeronautics to health and transportation to energy.

The ambassador said the platform would allow the alumni to access career opportunities with the organisation, as they would be able to post their Curriculum Vitae (CVs), manage profiles and engage in intellectual exchanges.

Ambassador Pujolas said the Campus France Ghana team had already identified a potential network of between 600 and 800 former students that they could mobilise.

To date, he said about 250 alumni had already registered on the platform.

Besides being a professional social network or Internet site, he said the platform added value in economic, cultural and linguistic contexts as it created links between alumni and Ghanaian students in France.

“It will also help bring in different partners, particularly companies,” he stated and added that “It is a real tool to support job search and an impetus to the cooperation between France and Ghana.”

Mr Pujolas said he was happy to note that the fourth Ghana-France Higher Education Conference that started last Tuesday and the first-ever Study in France Fair being held in Accra and Kumasi were expected to highlight and strengthen partnerships between universities in both countries and promote studies in France in both French and English languages.

The two-city educational expo being held under this year’s umbrella initiative of “France and Ghana:1957-2017; moving forward together” and being organised by the French Embassy in Ghana, in collaboration with Campus France and Institut Français, marks 60 years of bilateral relations between the two countries.

For his part, the Director, Marketing and Scholarships Department of Campus France, Mr Olivier Chiche-Portiche, said more than 1,200 programmes were offered at the master’s and doctorate levels in both French and English languages.

He said being bilingual and multicultural also provided job opportunities at an international level as the French language was spoken on all continents.