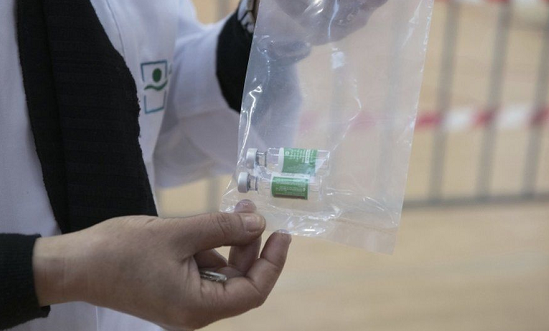 The AstraZeneca vaccine has now been approved for use in the EU
30.5k Shares

The EU's drugs regulator has approved the use of the Oxford-AstraZeneca Covid vaccine for people aged over 18.

The European Medicines Agency (EMA) said the AstraZeneca vaccine was about 60% effective in the trials on which it based its decision.

The move comes amid a dispute over whether Astra-Zeneca is breaking its vaccine delivery commitments to the EU.

The European Commission has published its contract with the Anglo-Swedish drug-maker, hoping to show a breach.

What is the supply row about?

Last week AstraZeneca said vaccine supplies would be reduced because of problems in one of its EU factories.

The shortfall is expected to be about 60% in the first quarter of 2021. The EU has also received fewer than expected doses of the two other vaccines it has approved - from Pfizer-BioNTech and Moderna.

The EU has said AstraZeneca must honour its commitments and deliver the jabs it ordered by diverting doses manufactured in the UK. But the company said its contract for UK supplies prevents this.

The commission later said it had agreed a plan to introduce export controls on coronavirus vaccines. It means individual member states will decide whether to allow the export of vaccines produced in their territory. It will be in place until the end of March.

A European Commissioner said it was being introduced to enhance transparency and to ensure that all EU citizens had access to vaccines.

How effective is the AstraZeneca vaccine?

Germany's vaccine commission said this week that it could not recommend the use of the jab in people aged over 65, citing a lack of data on how it affected this age group.

The UK has been using the AstraZeneca vaccine in its mass immunisation programme for weeks now, and public health officials say it is safe and provides "high levels of protection".

Confirming it had approved the vaccine, the European Medicines Agency (EMA) said that most participants in the test studies were between 18 and 55 years old. It said that while there were not yet enough results to show how the vaccine will work in older people, "protection is expected, given that an immune response is seen in this age group and based on experience with other vaccines."

Individual EU countries can still decide who vaccines should be given to, once they have been approved.

Supplying vaccine will be the big test

It would have been very surprising if EU regulators had not given the go-ahead for this vaccine that they have been pre-ordering hundreds of millions of doses of. The UK approved it weeks ago, and millions of people in Britain have already received their first shot that should give them protection very soon.

Trials show it is highly effective at preventing severe illness and deaths from coronavirus. But there have been questions about how well it works in people aged 65 and above, because there isn't as much data for that age group - fewer than 10% of the trial volunteers were in this age bracket. However, there is other evidence to suggest the vaccine works very well in older adults.

Studies show that, like other age groups, the over-65s have a strong immune response to the vaccine. After receiving the shots their blood has plenty of the required antibodies that can fight the coronavirus. It will be up to individual countries to decide who - including which age groups - to offer the shots to.

The bigger question will be how soon EU nations can get large deliveries of the vaccine. Supplies of this and other Covid vaccines are in huge demand, but there is a limit to how much can be manufactured at pace.