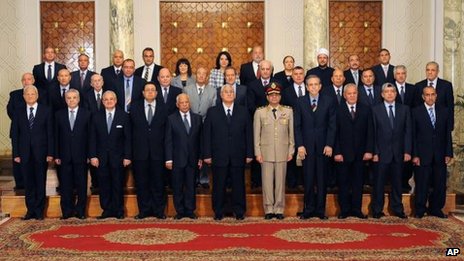 A new interim Egyptian government has been sworn in, with army chief Gen Abdel Fattah al-Sisi, who led the ousting of Mohammed Morsi, becoming deputy PM as well as defence minister.

Hazem al-Beblawi is the new PM, under the interim President Adly Mansour.

The swearing in followed another night of violence between security forces and Morsi supporters that left seven dead.

Mr Morsi was ousted on 3 July in what many have said was a military coup.

The army said it was fulfilling the demands of the people after mass anti-Morsi protests.

The swearing-in ceremony was shown live on state television.

Mohammed Ibrahim, who had been appointed interior minister by Mr Morsi, keeps his post.

There are three women ministers, including Maha el-Rabat, who takes the health portfolio.

There were no posts for any figures from Islamist parties in the new government. The Brotherhood had said it would not take part.

The interim government's transition plan will see a panel formed by next week which will draw up amendments to the constitution and a timetable for new elections.

More than 400 people were arrested and seven killed in overnight clashes in the capital, Cairo.

The battles erupted after protesters, mostly members of the Muslim Brotherhood, blocked the Sixth of October bridge, a major route over the Nile and through the capital, and the nearby Ramses Square, a transport hub.

Police fired tear gas to try to break up the blockade. Protesters responded by throwing stones. Other clashes broke out in the Giza district, in the south-west.

The head of Egypt's emergency services, Mohamed Sultan, said two people had died on or around the bridge and five in Giza.

State media quoted health ministry official Khaled al-Khatib as saying that 261 people were injured in the clashes, which lasted into the early hours of Tuesday. Mr Khatib said 124 people were still in hospital.

Mr Sultan said security personnel were among the casualties.

Members of the Brotherhood said security forces had used live ammunition, and accused them of attacking a peaceful protest.

He told the BBC's James Reynolds: "That was not peaceful protesting. We had armed protesters. The role of the military is to defend the military units and facilities... the Egyptian forces have never been created to kill Egyptians or to be killed by Egyptians."

Col Ali said the army had handed over its political role to the new interim government, adding: "We are not seeking to rule."

He met interim leaders but was snubbed by rival groups, including the Muslim Brotherhood.

Mr Burns described the events of the past two weeks as a "second chance to realise the promise of the revolution" that ended the authoritarian presidency of Hosni Mubarak in 2011.