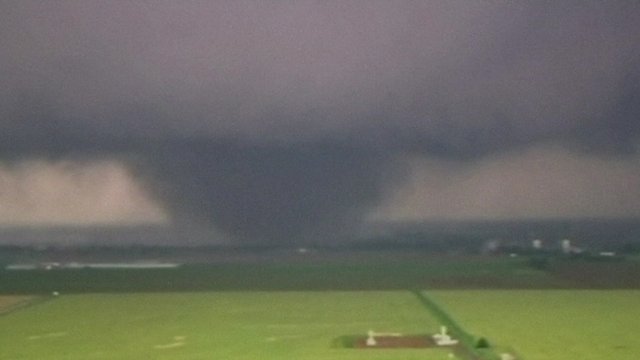 At least 51 people have been killed after a huge tornado tore through the Oklahoma City suburbs, with the death toll likely to rise, the Oklahoma chief medical examiner's office has said.

About 120 people, including 70 children, are being treated for injuries in hospitals around Moore.

Search and rescue efforts will continue throughout the night, officials said.

Monday's twister hit Moore, a suburb of about 55,000 people just south of Oklahoma City, and remained on the ground for about 45 minutes.

President Barack Obama has called Oklahoma Governor Mary Fallin to offer assistance and has asked her to contact him directly if she needs additional help.

Governor Fallin said it was a "tragic" day and "hearts are broken" for parents looking for their children.

Emergency agencies including the National Guard and out-of-state departments were called in to assist the search and rescue effort, she said.

At the Plaza Towers Elementary School, children were being pulled out of the rubble alive soon after the storm.

James Rushing said the school, where his foster son Aiden is a pupil, was destroyed by the storm.

"About two minutes after I got there, the school started coming apart," he told the Associated Press.

Volunteers and rescue workers could be seen picking through the rubble in aerial news footage, which showed entire streets of houses levelled to their foundations.

Hospitals in the area said as many as 120 people were injured, including about 70 children, the Associated Press news agency reported.

"It's certainly the most powerful tornado that I've ever dealt with in my 20 years with the weather service," NWS meteorologist Rick Smith in Norman, Oklahoma, told the BBC.

The town of Moore was hit by a severe tornado in May 1999, which had the highest winds ever recorded on earth.

But Betsy Randolph of the Oklahoma Highway Patrol told local news station Skynews 9 that the damage on Monday appeared to exceed that of the last devastating tornado.

Tornadoes, hail and high winds also hit Iowa and Kansas, part of a storm system stretching from Texas to Minnesota.

On Sunday, a tornado smashed a trailer park on Highway 102 near Shawnee, Oklahoma. Oklahoma's state medical examiner confirmed on Monday that two people had been killed in the area.