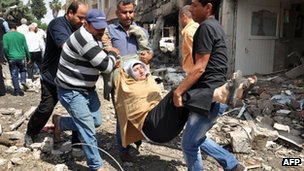 At least 18 people have been killed and more than 22 wounded in car bomb attacks in a Turkish town close to the Syrian border, the interior minister has said. The blasts were reported at the town hall and post office in the town of Reyhanli, in Hatay province.

Thousands of refugees have fled Syria across the Reyhanli border.

Five people were killed last October when a mortar round hit the Turkish border town of Akcakale.

As many as four explosions were reported at around 13:55 local time (10:55 GMT), causing panic in the town, Turkish media said.

Several ambulances were helping the injured and eyewitnesses described the blast damage as extensive - with many shops and homes having their windows blow out, and vehicles destroyed.

Emergency services were looking for other possible victims buried under rubble.

The town hall was among buildings that were badly damaged, reports said.

"There may be those who want to sabotage Turkey's peace, but we will not allow that," he said during a visit to Berlin.

"No-one should attempt to test Turkey's power. Our security forces will take all necessary measures."

He added that the blasts had taken place to deflect attention from efforts to solve the Syrian crisis.

The border area of Reyhanli has itself been attacked in recent months. In February, 13 people were killed and more than 20 others wounded when a mortar round landed close to a border gate.

The Turkish government has been a key supporter of the Syrian opposition, and has allowed rebels as well as refugees onto its territory.

But tensions in the Reyhanli area have been high for several weeks, reports say, with clashes between Turkish and Syrian youths.