David Cameron: Syria action would be in the UK's national interest

The prime minister denied claims it would make the UK a bigger target for terror attacks, as he made the case for military action in the Commons.

He told MPs the UK was already a target for IS - and the only way to deal with that was to "take action" now.

The UK could not "outsource our security to allies" and it had to stand by France, he added.

A Commons vote is expected within weeks on whether to authorise air strikes.

The prime minister is urging MPs to back military action as he sets out a "comprehensive strategy" to tackle IS. 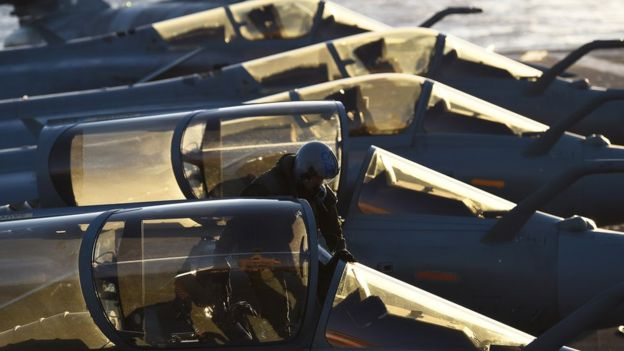 He published his response to a recent Foreign Affairs committee report on air strikes ahead of the speech, saying: "The threats to our interests and to our people are such that we cannot afford to stand aside and not to act."

Mr Cameron is expected to tell MPs: "Decisions to use force are not to be taken lightly.

"It is right that Parliament, on behalf of the people, asks difficult questions and holds the government to account."

The Foreign Affairs Committee report set out a number of tests it said should be met before air strikes were considered.

The committee said there should be no military intervention without a "coherent international strategy" on tackling IS and ending Syria's civil war.

Mr Cameron, whose statement comes just under a fortnight since the terror attacks in Paris which killed 130 people, will need to convince enough MPs from other parties to back his case in order to offset any Conservative rebels.

Labour leader Jeremy Corbyn is under pressure to offer his MPs a free vote.

Mr Corbyn has indicated his opposition to intervention, but some of his MPs are likely to back the move.

The Labour leader is hoping his shadow cabinet can reach a "collective view" before the day of the vote.

MPs rejected strikes against Syrian government forces in a 2013 vote, but have since authorised action against IS in Iraq.

The government argues it is "illogical" to restrict action to Iraq as IS does not recognise the border between the countries.

It has said it will call a vote on targeting the group, which it refers to as Isil, only when it is sure to win.