Covid: Biden orders employees of big businesses to be vaccinated or face testing 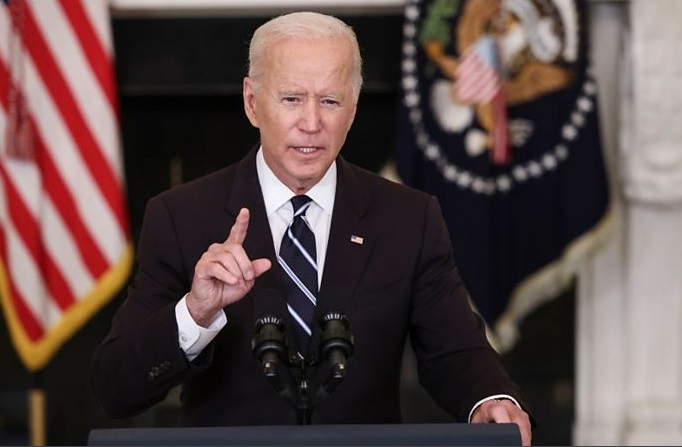 Biden's message to America's unvaccinated: "Our patience is wearing thin."

US President Joe Biden has announced sweeping new Covid-19 measures that require workers at large companies to be vaccinated or face weekly testing.

The measures also include a vaccine mandate for millions of federal government workers and come as cases in the country are surging.

Hospitals in several states have reached capacity amid the spread of the more transmissible Delta variant.

"This is not about freedom, or personal choice, it's about protecting yourself and those around you," the president said as he unveiled his plan.

More than 650,000 Americans have died with Covid-19 since last year. Some 80 million people in the US remain unvaccinated.

Mr Biden announced his plan in a speech at the White House on Thursday.

He said he had directed the US Department of Labor to require all private businesses with 100 or more staff to mandate the jab or request proof of a negative coronavirus test from employees at least once a week.

The plan triggered an immediate backlash among some Republicans, who argued that the government should not play a role in the health decisions of individuals.

South Carolina Governor Henry McMaster said "Biden and the radical Democrats [have] thumbed their noses at the Constitution".

Biden's new Covid plan
The president's plan uses the full force of his executive power to mandate the jab for unvaccinated Americans.

Some of his initiatives address common concerns of Americans who have yet to get the vaccine - such as not wanting to miss work to get the jab or recover from side effects.

The president said that requirements that large businesses provide paid time off for workers to get vaccinated will be unveiled in the coming weeks by the Occupational Safety and Health Administration (Osha).

Businesses that do not comply with the new rules may face thousands of dollars in fines per violation.

A separate federal mandate, which the White House says will impact some 2.5 million government workers, supersedes Mr Biden's earlier order that permitted government employees to undergo regular testing if they did not wish to be vaccinated. Now workers that refuse the jab may be fired.

Overall, the rule now requires that about two-thirds of all US workers be vaccinated.

Thousands of people - largely unvaccinated - are dying every week in the US with Covid-19.

The situation has dealt a blow to Mr Biden's hopes that a successful pandemic response would bolster support for the Democratic president.

Other rules that Mr Biden directed include:

Despite the Delta-fuelled surge, deaths are still down in most places from the levels seen last winter. However, some regions with relatively low jab rates have recently recorded record high infection rates.

"The path ahead, even with the Delta variant, is not nearly as bad as last winter," Mr Biden said in Thursday's address.

"What makes it incredibly frustrating is that a distinct minority of Americans are keeping us from turning the corner."

According to the US Centers for Disease Control and Prevention (CDC), 64% of American adults are fully vaccinated. More than 75% have received their first dose of a Covid-19 vaccine.

Separately on Thursday, education officials in Los Angeles voted to require students aged 12 and above to be vaccinated in order to attend school by January - unless they have a medical or other exemption.

The measure is likely to be challenged in the courts.