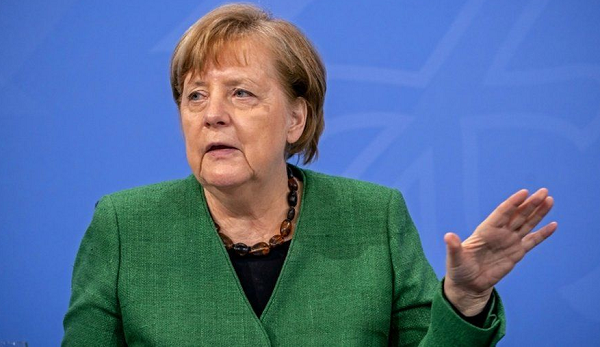 Germany has extended its lockdown for three weeks, imposing an almost complete halt over the Easter holiday in response to a third wave of coronavirus infections.

Restrictions will be even tougher from 1-5 April, when most shops will be shut and gatherings will be limited.

"Case numbers are rising exponentially and intensive care beds are filling up again," the chancellor told a news conference on Tuesday.

Coronavirus infections have been surging across Europe in recent weeks as countries scramble to vaccinate their populations despite delays in rolling out jabs.

Announcing the new restrictions after marathon crisis talks with the leaders of Germany's 16 states, Mrs Merkel said the highly contagious UK (Kent) variant of coronavirus had become dominant in Germany, plunging the country into what she called "a new pandemic".

"Essentially, we have a new virus," the German chancellor said. "It is much deadlier, much more infectious and infectious for much longer. " Germany was in a race against time to roll out vaccinations against the coronavirus, she added.

Tuesday's lockdown extension marks a reversal from earlier this month, when state leaders agreed to begin a cautious reopening process.

What are the new measures?

Existing measures, such as the closure of sporting facilities, will remain in place until 18 April.

Then, for five days over Easter from 1 April, Germans are being asked to stay at home and reduce contacts:

An "emergency brake" will halt further re-openings in areas where infections exceed 100 new cases per 100,000 people over a seven-day period.

Among measures agreed late on Monday by Danish leaders is a proposed "corona pass", which would say whether the holder has been vaccinated, previously infected or has had a negative test in the past 72 hours. Children under 15 will be exempt.

The aim of the passport, which will be available on mobile phones as well as on paper, will be to enable people who fulfil the requirements to go to the hairdresser, a restaurant or eventually a cinema.

The current plan is to reopen small shopping centres from 13 April and larger ones from 21 April, along with outdoor eating at cafes and restaurants. Cinemas and indoor dining would resume on 6 May.

Danish Prime Minister Mette Frederiksen said most restrictions would be lifted once all over 50s had been vaccinated, which she expects to happen in May.

Part of the reason for that is supply problems with the Oxford/AstraZeneca vaccine - now at the centre of political tensions between the UK and EU over the firm's contractual obligations.

The EU is now considering an export ban targeting AstraZeneca production in Europe. EU officials complain that too much of the vaccine is going to the UK and other countries, rather than staying in the EU.