Myanmar coup: Seven-year-old shot 'as she ran into father's arms' 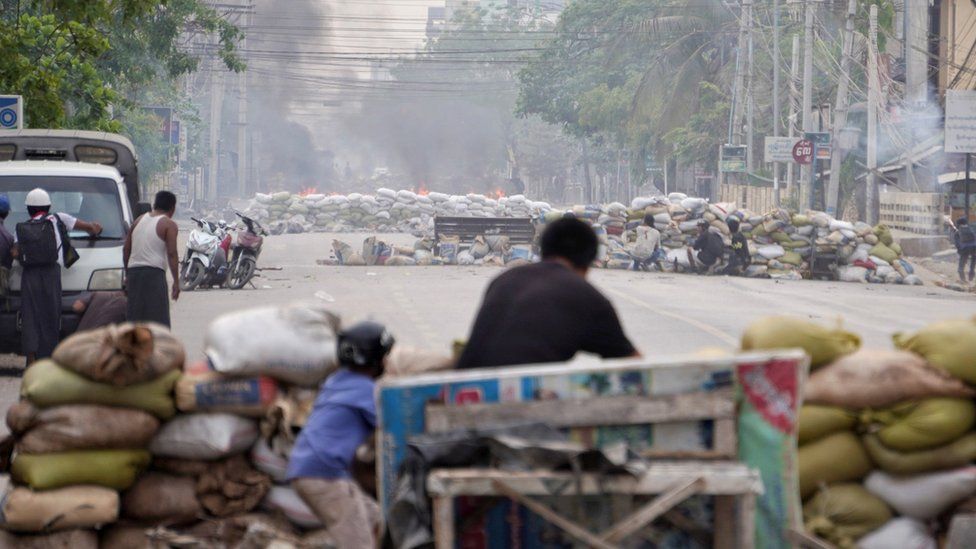 image captionProtests over the coup have been taking place in Mandalay, and across Myanmar, since last month
30.5k Shares

A seven-year-old girl has been shot dead in Myanmar, becoming the youngest known victim in the crackdown following last month's military coup.

Khin Myo Chit's family told the BBC she was killed by police while she ran towards her father, during a raid on their home in the city of Mandalay.

Myanmar's military has been increasing its use of force as protests continue.

Rights group Save the Children says more than 20 children are among dozens of people who have been killed.

In total, the military says 164 people have been killed in protests, while the Assistance Association for Political Prisoners (AAPP) activist group puts the death toll at at least 261.

The military on Tuesday expressed sadness at the death of protesters, while blaming them for bringing anarchy and violence to the country.

But security forces have used live rounds against protesters, and there have been multiple eyewitness reports of people being beaten and sometimes shot as the military conducts house raids to arrest activists and protesters.

'Then they shot her'

Khin Myo Chit's older sister of the shot girl told the BBC police officers were searching all the houses in their neighbourhood in Mandalay on Tuesday afternoon, when they eventually entered their place to search for weapons and make arrests.

"They kicked the door to open it," 25-year old May Thu Sumaya said. "When the door was open, they asked my father whether there were any other people in the house."

When he said no, they accused him of lying and began searching the house, she said.

That was the moment when Khin Myo Chit ran over to their father to sit on his lap. "Then they shot and hit her," May Thu Sumaya said.

In a separate interview with community media outlet Myanmar Muslim Media, their father U Maung Ko Hashin Bai described his child's last words. "She said, 'I can't Father, it's too painful'."

He said she died just half an hour later while she was rushed away in a car to seek medical treatment. Police also beat and arrested his 19-year-old son.

The military has yet to comment on the death.

In a statement, Save the Children said it was "horrified" by the girl's death, which came a day after a 14-year-old boy was reportedly shot dead in Mandalay.

"The death of these children is especially concerning given that they reportedly were killed while being at home, where they should have been safe from harm. The fact that so many children are being killed on an almost daily basis now shows a complete disregard for human life by security forces," the group said.

Meanwhile on Wednesday, authorities released around 600 detainees held at a Yangon prison, many of them university students. The AAPP says at least 2,000 people have been arrested in the crackdown so far.

Protesters have planned for a silent strike with many businesses to close and people to stay at home. There are also plans for more candle-lit vigils overnight, both in Yangon and elsewhere.