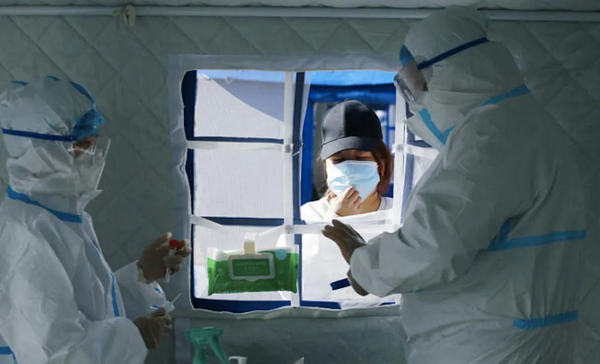 A city in central China has gone into lockdown to curb the spread of Covid-19, according to local authorities.

The municipal government of Yuzhou, Henan province said all 1.2 million residents will be confined to their homes after just two asymptomatic cases were reported Sunday. A third local asymptomatic infection was identified Monday, the government added.

Barring essential services such as supermarkets, all public facilities including schools, public transport and shopping malls have suspended operations.

Those who work in essentials industries, including supermarkets, medicine production, and energy plants, are allowed to go to work after presenting a negative Covid-19 test, the government said.

China reported 108 new local cases across three provinces on Monday, including 95 in northwestern Shaanxi province, eight in southeastern Zhejiang, and five in Henan, according to the National Health Commission (NHC).

The Yuzhou lockdown mirrors the strict restrictions imposed on residents of the northwestern city of Xi'an, capital of Shaanxi.

Since December, the ancient city has been grappling with China's largest community coronavirus outbreak since Wuhan, the original epicenter of the pandemic.

To date, more than 1,700 cases have been reported in the city. While the number pales in comparison to those in many other countries, the outbreak pushed China's caseload in the final week of 2021 to the highest level since March 2020.

Xi'an's 13 million residents have been confined to their homes since December 23. Many are growing desperate as they run out of essential supplies, including groceries, and fall short on medical attention.

Zero Covid: Xi'an authorities launched a fifth round of mass testing on Tuesday, vowing to eliminate the outbreak.

But the frustrations of residents underscore the growing challenge facing China's zero-Covid policy, which relies on a playbook of mass testing, extensive quarantines and snap lockdowns to stamp out any resurgence of the virus.

While the stringent measures have largely shielded the majority of the country from the worst aspects of the pandemic, as local outbreaks continue to flare up, the outcry in Xi'an raises the question of just how long zero-Covid can be sustained before public support begins to taper off, with millions of residents trapped in an seemingly endless cycle of lockdowns.