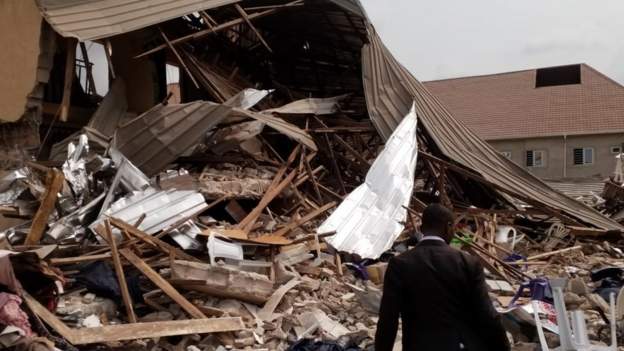 The building was reportedly being used for the first time,. BBC Follow @Graphicgh

At least two children and a woman were killed after a church collapsed during a service on Tuesday evening in Asaba, the capital of Nigeria's southern Delta state, police have confirmed.

Rescue used an excavator until the early hours of Wednesday to dig through the rubble to find survivors.

Eleven of them sustained injuries and were being treated in hospital, he added.

The building was reportedly being used for the first time. It is still unclear what caused it to collapse.

In November, more than 40 people died when a partially built block of luxury apartments collapsed in city of Lagos.

Construction experts say a lot of buildings cave in because of sub-standard material, negligence and the flouting of construction regulations.