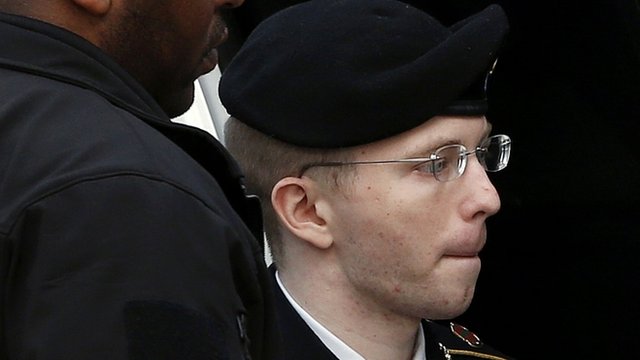 The US soldier convicted of handing a trove of secret government documents to anti-secrecy website Wikileaks has been sentenced to 35 years in prison.

Pte First Class Bradley Manning, 25, was convicted in July of 20 charges against him, including espionage.

In a statement read by his lawyer after the sentencing, Pte Manning said he had acted "out of love for our country".

His supporters have called on President Barack Obama to pardon the soldier or commute his sentence to time served.

Pte Manning will receive a credit against his sentence of about three and a half years, including time he has already served in jail and 112 days in recompense for the harsh conditions of his initial confinement.

His defence lawyer David Coombs said Pte Manning would first be eligible for parole in about seven years.

Prosecutors had asked for a 60-year sentence in order to send a message to future potential leakers, and Wikileaks called the 35-year sentence a "significant strategic victory".

In addition to the prison sentence, likely to be served at Fort Leavenworth, Kansas, Judge Col Denise Lind sentenced Pte Manning to be demoted to private and dishonourably discharged from the US Army, and to forfeit his pay.

While stationed in Iraq in 2010, the junior intelligence analyst passed hundreds of thousands of battlefield reports and diplomatic cables to Wikileaks, the pro-transparency group headed by Julian Assange.

Pte Manning has said he leaked the secret files in the hopes of sparking a public debate about US foreign policy and the military.

"The time to end Brad's suffering is now," he said.

Mr Coombs read a statement from Pte Manning that will be included in the request.

"The decisions I made in 2010 were made out of a concern for my country and the world we live in," Pte Manning said, according to Mr Coombs.

"When I chose to disclose classified information... I did so out of love for our country and a sense of duty for others. If you deny my request for a pardon I will serve my time knowing that sometimes you have to pay a heavy price to live in a free society."

Mr Coombs also read a statement from the soldier's family, which said they were "saddened and disappointed" by the sentence.

For his own part, the lawyer said he was in tears after the sentence was handed down but that Pte Manning had told him: "I know you did your best. It's going to be OK."

When asked about the pardon request, White House spokesman Josh Earnest said he was "not going to get ahead" of the process.

The soldier's uncle, Kevin Fox, of Haverfordwest, Wales, said the family had expected a harsher sentence.

"In my honest opinion, he shouldn't have been given any time at all," Mr Fox told the BBC. "In my eyes he is a hero."

The verdict and sentence will be reviewed, and possibly reduced, by a military district commander and will be automatically reviewed by the Army Court of Criminal Appeals.

Pte Manning may also petition the court for lenience during the appeals process.

The young soldier grew up in Oklahoma and in Wales, where his mother is from, and reportedly joined the US Army to help pay for college.

As an intelligence analyst, he had access to a large amount of very sensitive information, despite his junior rank.

He deployed to Iraq in 2009 and soon became disillusioned with the war, his defence lawyer has said.

A military psychiatrist testified that Pte Manning had struggled with his gender identity and wanted to become a woman at the time of the leak.

Navy Capt David Moulton testified that Pte Manning had felt abandoned by friends and family and that his relationship with his boyfriend had hit a rough patch.

According to evidence presented by the defence, military supervisors ignored Pte Manning's erratic behaviour, which included trying to grab a gun during a counselling session.

His lawyers said such actions had shown that Pte Manning had not been fit for duty overseas.

Defence lawyers said Pte Manning was treated unfairly in solitary confinement in Quantico, Virginia and in a cell at Camp Arifjan, a US Army installation in Kuwait.

The leaks enabled Wikileaks to publish sensitive messages between US diplomats and records of military incidents in the wars in Iraq and Afghanistan, as well as a cockpit video showing an Apache helicopter killing 12 people in the Iraqi capital in 2007.

The revelations caused significant embarrassment to the US government, and its officials have said the disclosures damaged America's relations with its allies and disrupted the war effort in Afghanistan.