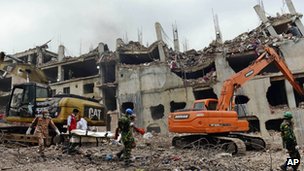 The death toll from Bangladesh's worst industrial accident has passed 1,000 people, as recovery teams continue to find more bodies in the wreckage.

The eight-storey Rana Plaza factory building, in Dhaka, collapsed on 24 April, with an unknown number inside.

The authorities say about 2,500 people were injured in the accident and 2,437 people were rescued.

The recovery operation is expected to finish on Friday. The rubble will then be shifted by bulldozers.

Army Captain Shahnewaz Zakaria told news agency AFP that 130 more bodies had been recovered from the rubble since Thursday morning.

Many bodies were decomposed, but could be identified by mobile phones in their pockets or staff passes, he said, adding that "most [of the dead] are female garment workers".

The authorities are taking DNA samples from the victims, which can be used in future compensation claims, AFP reported.

The Rana Plaza building had housed a number of garment factories. A number of officials - including the building owner - have since been arrested and charged with causing deaths by negligence.

Protesters have taken to the streets calling for the death penalty for the owner, and garment workers have alleged that they were forced to work in the building despite cracks appearing on the walls.

Bangladesh has one of the largest garment industries in the world, and some of the clothes produced in the Rana Plaza building were made for Western retailers.

On Wednesday, Bangladesh announced a shutdown of 18 garment factories for safety reasons, amid growing concerns over the issue of industrial safety across the country.