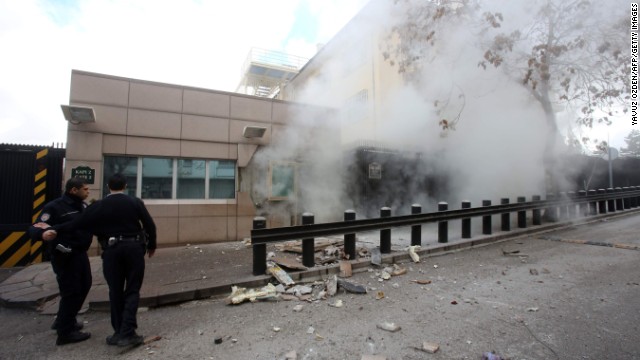 (CNN) -- Fears that al Qaeda may launch attacks in the Middle East, North Africa and beyond in the coming days prompted the United States to close 22 embassies and consulates for a day Sunday -- an unprecedented move.

The closures Sunday stretch across a swath of North Africa and the Middle East, from Mauritania to Oman.

Bangladesh and Afghanistan, both majority Muslim nations, also are affected.

Normally, Sunday is the start of the work week in those countries.

The shutdowns could extend beyond Sunday, a senior State Department official said.

A U.S. global travel alert is also in place.

Of particular concern is Yemen, where the government is "on high alert against possible attacks in the days to come," said a senior U.S. security official.

On Saturday, the security around the U.S. embassy in Yemen was even tighter than last year when the embassy was raided by protesters. At least 12 tanks were stationed within 500 meters of the building.

Britain, France and Germany have said they, too, will close their embassies in the Yemeni capital, Sanaa, on Sunday and Monday for security reasons. No other embassies are affected, they said.

The U.S. government's actions are in response to growing intelligence that shows a potential for attacks in Yemen and elsewhere in the Middle East and North Africa, said U.S. officials who spoke to CNN on condition of not being identified.

"The threat appears to be much worse than it has (been) in a long time," said the senior U.S. security official in Yemen.

Various Western targets -- not just those tied to the United States -- are under threat, two U.S. officials said.

Three sources said the United States has information that members of al Qaeda in the Arabian Peninsula are in the final stages of planning for an unspecified attack.

One of the sources said such preparations appeared to have increased in recent days with the approaching end of the Muslim holy month of Ramadan. Sunday is Laylet al-Qadr, or the Night of Power, one of the holiest moments on the Muslim calendar.

Said one U.S. official: "It all leads us to believe something could happen in the near future."

Some select U.S. military forces in the Middle East were put on a higher state of alert.

Defense Secretary Chuck Hagel held a series of high-level meeting at the Pentagon "to take a look at what forces we have in the region" that can be used if there is an attack, a U.S. official told CNN.

These forces are at "quite a high state of readiness achieved only a handful of times in the last year," the official said. He declined to be specific, but CNN has been told by two other officials that U.S. Navy amphibious ships in the Red Sea earlier last week moved closer to Yemen.

There are also combat equipped Marines in southern Spain and southern Italy that could begin moving in as little as one hour from getting orders.

The US military has taken similar action in recent months, especially at times of unrest in Yemen and Egypt. These forces in the Red Sea, Spain, and Italy have been regularly deployed to these areas since last year's attack in Benghazi, when the U.S. military did not have forces nearby.

Christopher Hill, a former U.S. ambassador to Iraq, told CNN he had never seen embassy closures ordered across such a broad area.

"There have been incidents where they've closed down a number of embassies in the Middle East because the information is not specific enough to say that 'embassy X' got to be closed as opposed to other embassies," said Hill, who joined the U.S. Foreign Service in 1977.

"But I think this, closing all of these embassies in the Middle East to North Africa, is in fact unprecedented. At least, I didn't see this during my career."

U.S. officials said that, based on intelligence, they were particularly concerned about the U.S. Embassy in Yemen between Saturday and Tuesday. President Barack Obama, amid regular updates on the situation, has directed officials to take all appropriate steps to protect Americans.

Hundreds of additional security forces were deployed, and roads leading to the embassy were closed. Checkpoints were set up at a distance from the embassy, and trucks weren't allowed to pass anywhere near the main embassy road.

Yemen's special forces, the most elite, were seen in small numbers near the embassy, as well.

The UK Foreign Office has also warned its citizens against travel to Yemen, and urged British nationals to leave as soon as possible.

"If you don't leave the country now while commercial carriers are still flying it is extremely unlikely that the British government will be able to evacuate you or provide consular assistance," it said.

It was unclear whether the apparent plot targets that Arabian nation or one elsewhere -- which is why the travel alert applies so broadly, and why embassies from Bangladesh to Libya are being closed. Nor is the expected time of an attack known, which explains why a U.S. travel alert extends through August.

"Terrorists may elect to use a variety of means and weapons and target both official and private interests," the alert states. "U.S. citizens are reminded of the potential for terrorists to attack public transportation systems and other tourist infrastructure."

New York Rep. Peter King, a member of the House Intelligence Committee, called the information "the most specific I've seen."

While the principal attention is on the Arabian Peninsula, he stressed to CNN's Wolf Blitzer that "we can't rule anything out."

"We are focused on the Middle East, but it's a potential series of attacks that really could be almost anyplace," King said.

'An enemy who kills indiscriminately'

Retired Gen. James Mattis -- who until earlier this year was head of U.S. Central Command, responsible for a 20-country area that includes the Middle East -- said the decision to close the embassies underscores the reality of the threat and the wisdom of U.S. policymakers.

U.S. embassies have been targeted before in places such as Yemen, Turkey and Tanzania, he pointed out. Moreover, al Qaeda in the Arabian Peninsula is one of the terrorist network's most active and most destructive branches.

"We have to remember that we're up against an enemy who kills indiscriminately -- whether it be women, children, diplomats -- and our embassies ... have been one of the targets," Mattis told CNN on Friday.

Referring to the move by U.S. officials, he said, "They are showing some proactive discretion here, making certain that we don't give the enemy an opportunity that we can deny them."

House leaders have been briefed, Democratic leader Nancy Pelosi told reporters, adding that the travel alert and embassy closings provided "some understanding of the seriousness of the threat."

King, who has also heard such briefings, applauded the government's decision to close its diplomatic missions.

"I give them credit," the Republican said of the Obama administration. "I think the government is doing exactly the right thing here."

Such bipartisan agreement in Washington comes at a time when politicians are still scrutinizing the September 11, 2012, attack on the U.S. consular compound in Benghazi, Libya, which killed four Americans, including Ambassador Christopher Stevens.

Since then, Republicans have been pressing Obama's administration for answers, with some accusing officials of covering up what happened in Benghazi and not doing enough to track down the attackers.

Eight GOP lawmakers are asking that incoming FBI Director James Comey brief Congress within 30 days about the investigation. They say the administration's inquiry to date has been "simply unacceptable," according to a draft letter obtained by CNN.

Another official said the recent intelligence might not have warranted such a response before the Benghazi attack, which created a political firestorm for the administration.

On Thursday, State Department spokeswoman Marie Harf said the agency was taking the steps out of an abundance of caution.

The following U.S. posts normally open on Sunday will be closed on Sunday.