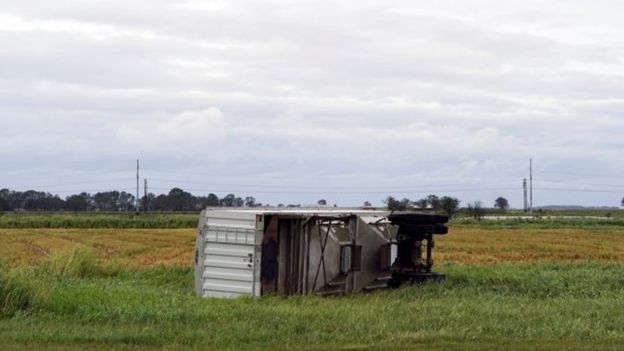 An overturned semi-trailer in Welsh, Louisiana. The winds have caused greater than expected damage Follow @Graphicgh

Hurricane Laura has struck the US state of Louisiana, causing flash floods, severe damage to buildings and power cuts to half a million homes.

It is one of the strongest to ever hit the US Gulf Coast, striking at category four with winds up to 150mph (240km/h).

Laura's storm surge has not reached the levels feared but is still considered life-threatening, and could spread 40 miles (65km) inland.

Half a million residents had been told to leave parts of Texas and Louisiana.

Louisiana Governor John Bel Edwards said early on Thursday: "We've had daylight now for a couple of hours. It appears there is more structural damage from the wind and a little less flood damage than we anticipated."

He confirmed the first fatality in his state, adding: "I suspect that won't be the last, although I pray that we don't have more." 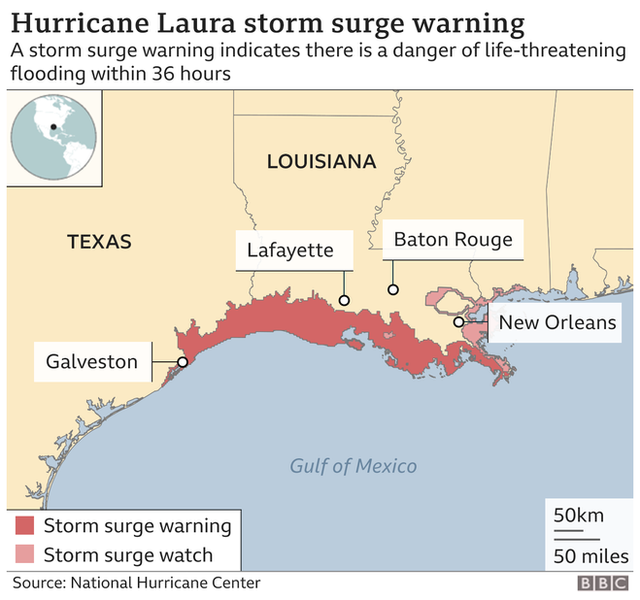 Where did Laura hit and what's its path?

Hurricane Laura made landfall shortly after midnight local time (05:00 GMT) near the district of Cameron, in Louisiana. It tracked north, just east of the Texas-Louisiana border.

Four hours later it had been downgraded to a category three storm, the National Weather Service (NWS) reported, before weakening again. At 14:00 GMT it was a category one hurricane with maximum sustained winds of 85mph (140 km/h).

What is the damage so far?

Daylight has now reached the region, so the extent of the damage is becoming more known.

Forecasters had earlier warned of an "unsurvivable" storm surge. But they said a slight change in wind direction had spared some areas from the feared 20ft surge, with 9ft (2.7m) recorded in some parts.

However, the surge could still affect areas 40 miles or more inland, up to the Lake Charles area, which has a lot of vulnerable marshland. Flood waters would "not fully recede for several days", the NWS said.

More than 500,000 homes in Louisiana and more than 100,000 in Texas had lost power by Thursday morning, according to the US tracking site PowerOutage.

Images from Lake Charles, a city of 78,000, have shown flying debris, broken windows and trees ripped from the ground, as well as severe flooding. Part of the roof of the Golden Nugget Casino flew off, a CNN-affiliated reporter witnessed.

Some 1,500 people are being deployed in rescue missions, Governor Edwards said, although the difficult conditions could delay this.

More than 420,000 Texas residents were ordered to leave, while an additional 200,000 were told to evacuate Calcasieu Parish in south-western Louisiana.

Texas Governor Greg Abbott had urged families who could afford it to take refuge in hotels and motels to be distanced from others.