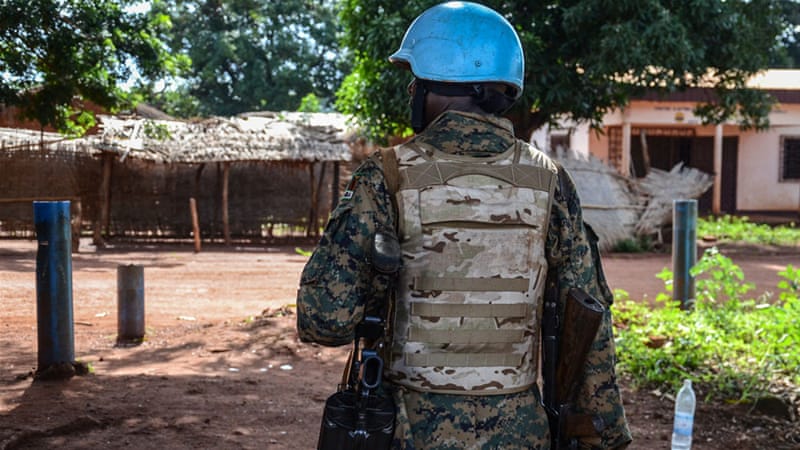 At least 55 UN peacekeepers are accused of sexual exploitation and abuse of civilians across UN missions around the globe since January 2017, new UN data show.

Data released late on Friday night also showed a new case of sexual exploitation was registered against Republic of Congo peacekeepers in the Central African Republic (CAR), less than 10 days after the United Nations announced the withdrawal of Congolese troops from the UN's mission over a string of allegations of sexual exploitation and abuse.

On Saturday, a UN spokesperson confirmed that a new allegation had been registered against the Congolese but declined to clarify if the recorded case of sexual exploitation took place before or after the stated withdrawal of the battalion.

"The allegation was recorded in June [...] an investigative process has been launched as per standard procedures," Sophie Boudre, a spokesperson for Department of Peacekeeping operations, told Al Jazeera.

UN peacekeepers have been hit by a series of accusations of sexual exploitation and abuse of civilians in its missions across the globe.

The international body has also been accused of burying cases and failing to act promptly or transparently to incidents perpetrated by its troops.

An AP investigation earlier this year found around 2,000 allegations of sexual exploitation and abuse have been registered between 2005-2017.

In March, the UN registered a total of 145 cases of sexual exploitation and abuse involving all members of the UN in 2016 - up from 99 in 2015. Since the beginning of 2017, there have been 33 recorded allegations involving 37 survivors, including six children.

Antonio Gutierrez, the new UN secretary-general, subsequently announced a series of measures to tackle the problem, but activists say the UN is fundamentally ill-equipped to end the problem.

In early June, the New York-based Code Blue Campaign, dedicated to ending impunity for crimes of sexual exploitation and abuse by peacekeepers, released an internal UN memo that showed no action had been taken against the Congolese troops in CAR, despite multiple complaints about their behaviour.

In the leaked memo addressed to UN headquarters, Lieutenant-General Balla Keita of Senegal, head of the UN peacekeeping force in CAR, wrote that he had sent six letters to the battalion commander in 2017 over alleged sexual abuse, fuel trafficking, and lack of discipline.

"The battalion is notorious for SEA [sexual exploitation and abuse] misconducts, fuel trafficking, and poor discipline," Keita wrote in the memo.

Following the leak, the UN announced on June 21 that it would be withdrawing the Congolese battalion made up of around 600 soldiers.

Code Blue Campaign, said it was relieved that the battalion would be withdrawn, but alleged that action had only been taken when the complaints had become public.

The Campaign said the UN now had a responsibility to ensure that soldiers facing credible allegations are prosecuted by Brazzaville authorities.

Under UN rules, it is up to the troop contributing country to investigate and prosecute criminal cases against military officers.

But with the Congolese troops being withdrawn, it is unclear if the investigations will be completed by the time troops leave the country.

With troop contributing countries responsible for investigating and prosecuting their soldiers, Donovan said there was little prospect of justice for survivors.

"Investigations are endlessly delayed; evidence passes from hand to hand; accused UN civilian staff are shielded from courts; the rare trial of a soldier happens thousands of miles away with no testimony from witnesses; and victims are left in the dark."

Since January, there have been nine cases of sexual exploitation or abuse made against UN peacekeepers stationed in CAR. None of the cases have been solved. The UN stipulates a period of six months to conduct investigations.

Earlier in June, the Dieudonne Nzapalainga, cardinal and archbishop of Bangui, told Al Jazeera the UN had "ended their complacency" when it came to addressing sexual exploitation and abuse among its troops.

"These soldiers who violate these laws should be held accountable.

"A strong signal needs to be sent to peacekeepers. We can't remain a country in which people can come and do anything they want. It will be terrible for us and for generations to come."