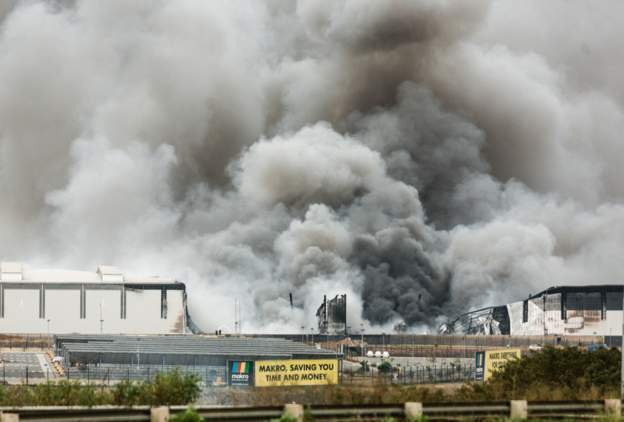 South Africa's President Cyril Ramaphosa, has described the violent unrest that swept the country over the past week as an assault on democracy.

He was speaking on a visit to the worst-hit province of Kwazulu-Natal, where almost 100 people were killed.

Mr Ramaphosa said it was clear the violence and looting had been planned and instigated - and those responsible were being pursued.

He said his government would not allow anarchy and mayhem to triumph.

The president also praised ordinary citizens who had mobilised to protect their areas and property.

He admitted some of the violence could have been avoided if security forces had acted faster, but said the priority had always been to avoid deaths.

"Yes, we could have done better but we were overwhelmed by [the] situation... [and had to] make sure that we did not get into a situation which could have resulted in more mayhem," he said.

The violence was triggered by the arrest of the former president, Jacob Zuma. About 25,000 troops have been mobilised to restore order.