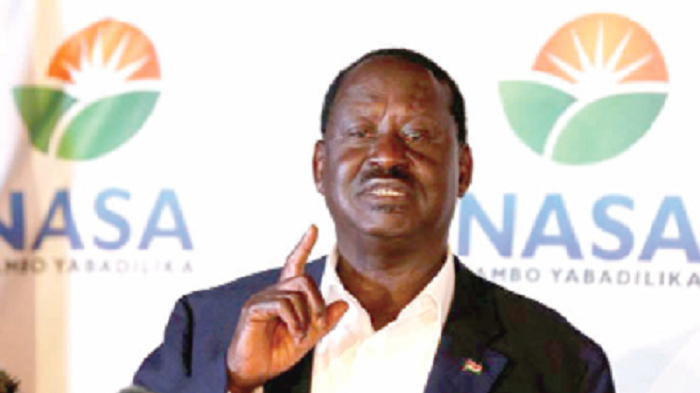 Kenya's opposition presidential candidate, Raila Odinga, has said the electoral commission's IT system has been hacked to manipulate the election results.

He has rejected early results from Tuesday's vote, indicating a strong lead for President Uhuru Kenyatta.

Mr Odinga said the hackers had gained access to the Independent Electoral and Boundaries Commission (IEBC) computer system by using the identity of the commission's IT manager, Chris Msando, who was killed last month.

He alleged that the hackers "loaded an algorithm" that allowed them to alter the results and ignore the figures being transmitted from tallying centres around the country.

The opposition leader had earlier told journalists the results coming in were "fake", because the authorities had failed to present documents verifying the results.
Speaking at a press conference however, Mr Odinga, who heads the National Super Alliance (Nasa), said his supporters should remain calm.

Electoral officials said that with 91 per cent of results in, Mr Kenyatta was leading with about 54.5 per cent, to Mr Odinga's 44.6 per cent.

These results mean Mr Kenyatta appeared to be heading for a first-round victory.

Meanwhile, Kenya's Independent Electoral and Boundaries Commission (IEBC) has advised people to ignore false claims circulating by text message that the results of the presidential poll will be published this evening.

The IEBC had not reacted to the claims that its IT systems had been hacked, but earlier it urged people to wait calmly for the full results of Tuesday's vote.

And, in the opposition stronghold of Kisumu, in western Kenya, the BBC saw a group of several hundred of his supporters take to the streets shouting: "No Raila, no peace."

Speaking to journalists in the capital, Nairobi, the Internal Security Minister, Fred Matiang'i, urged Kenyans to continue with their normal activities, saying he had not received any reports of unrest following the vote.

In order to avoid a run-off, a candidate needs 50 per cent plus one of the votes cast and at least a 25 per cent share of the vote in 24 of Kenya's 47 counties. There were eight candidates in all, but apart from Mr Kenyatta and Mr Odinga, none polled more than 0.3 per cent of the vote.

Meanwhile, the international observer missions present in Kenya, has called on the IEBc to undertake the tallying with full integrity and transparency so that all Kenyans could trust the announced results.

In a communique, the observers said, to achieve this, IEBC personnel needed to be able to work freely in a secure environment, with time to complete the process.