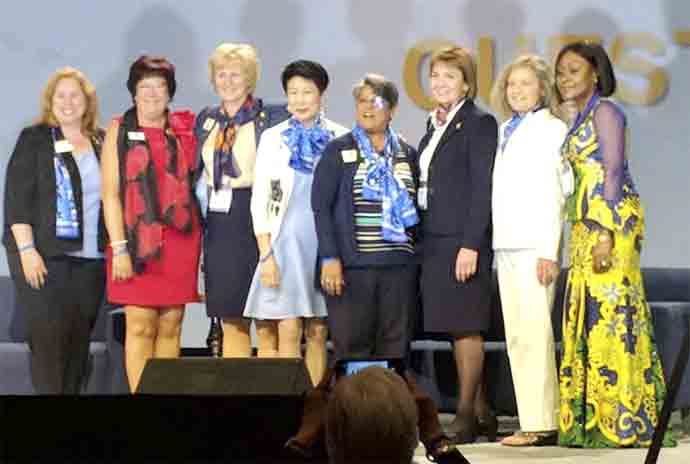 The President of Clubs International (LCI), Gudrun Yngvadottir, has appointed Past District Governor Lion, Mrs Gloria Esi Lassey, as a constitutional Area Chairperson for Africa, the Islands in the Indian Ocean and the Middle East under the New Voices Initiative

Constitutional area is one of the seven that make up the association.

Mrs Lassey was appointed to this position having demonstrated exceptional leadership qualities as Past District Governor, Centennial Coordinator for Multiple District 403 A2 and Chairman of the Organising Committee, Centennial Convention which was held in Accra last year, as well as the various roles she has played as a Lion.

Lion Lassey will be responsible for showcasing New Voices in the three areas under her jurisdiction to promote gender parity, encourage clubs to recruit and retain women and help close the gap between men and women in leadership positions.

The New Voices Initiative was launched in Las Vegas, United States of America (USA), on July 1, 2018, as part of the highlights of Lions Clubs International’s 101st International Convention, which was also held in Las Vegas from June 29 through July 3, 2018.

New Voices are Lions who demonstrate exceptional influence as it relates to women in one of four areas namely: service, membership, leadership and marketing.

Such exceptional Lions are ready whenever and, however, communities need them and participate regularly in service projects and the men who help make women more visible in service.

They are also Lions who are always working hard to recruit and retain new female members, welcoming everyone into the Lions family.

These members are also global leaders in the community who undertake humanitarian service, while they are also influential female leaders and men who support women in leadership roles and bring compassion to their service.

It is the largest service club organisation worldwide.

The New Voices Initiative is a major programme of the International President Yngvadottir, who is from Gardabaer, Iceland.

She was elected to serve as the international president of LCI at the Convention in Las Vegas.

The new International President is a biomedical scientist and has worked in research, education and management. Since 1990, she has worked at the University of Iceland as Vice Director at the Institute of Continuing Education.

A member of the Gardabaejar Eik Lions Club since 1992, President Yngvadottir has held many offices within the association, including District Governor Council Chairperson. She has dedicated her service to children and youth, membership and leadership development, health and wellness, including vision and diabetes, environmental projects and the Lions Clubs International Foundation (LCIF).

President Yngvadottir and her husband, Dr Jon Bjarni Thorsteinsson, a past International Director and Progressive Melvin Jones Fellow of the LCI, have one son, one daughter and six grandchildren.

Accomplished people from around the world have led our great association in its over 100-year history.

While each international president brings a unique perspective and expertise to Lions Clubs International, there has always been a single constant that unites all Lions, and that is service.

With this as a guide, each president is committed to helping clubs increase their service and as a result, their impact on our local and global communities.

The international president’s programmes and initiatives will focus on four key elements of Lions International that are important to the association forward.

These elements are moving membership forward, increasing leadership development, promoting the fellowship of Lions and sharing the Lions stories.

Her presidential motto is, ‘Beyond the Horizon’ and her focus is, ‘Harnessing the Power of 1.4 Million Lions’.