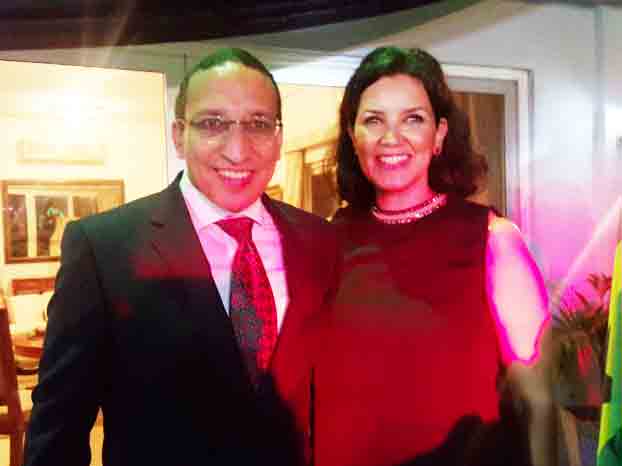 Egypt and Ghana are two of the major countries when it comes to their role in promoting, adopting and defending the African Agenda

are both leading countries in peacekeeping within the United Nations (UN) in Africa missions.

“Our cooperation in regional and multicultural fora is exemplary and I am sure that this cooperation will be further intensified when Egypt assumes its role as chair of the African Union (AU) in January 2019,” the Egyptian Ambassador to Ghana, Mohamed Heider, has stated.

The ambassador said these in an address to mark Egypt’s National Day.

He gave an assurance that “Egypt will exert its utmost efforts with Ghana and its sister countries in the continent for a better future for Africa, with regard to several files of priority as the AU Reform, Peace and Security in the continent, promoting the regional integration aiming at a continental free trade area in the future and to fight terrorism, an ugly phenomena that is threatening everybody right now”.

In this regard, he noted that Egypt would be hosting the for combating terrorism of the Sahel countries.

He recalled the active and successful period Egypt had spent during 2016 – 2017 as a non-permanent member of the UN Security Council.

Heider observed that it had always been a priority for them to carry the voice of Africa and defend the African Agenda.

Heider stressed that Egypt’s relations with Ghana very and that bilateral cooperation was going on in different channels, mainly through an effective programme of capacity building and human resource developments in the fields of agriculture, fisheries, security, Information Communication Technology (ICT) among others.

He said scholarships at Al Azhar University and others were also an effective channel of their cooperation in this regard.

He pointed out that Egypt had a positive presence through their Egyptian companies in Ghana such as Rafi Aluminium, Egypt Air, El-Sweedy Cables and Electrometer, Arab contractors and Port Said for maintenance and cranes and other companies in the field of Agriculture/Agro-processing and many others which were actively present in Ghana.

“We are witnessing more interest by Egyptian companies to come and explore the opportunities that are here.

Heider disclosed that Egyptian exports had risen by 58 in 2017, according to official data.

“We will continue to do whatever necessary in this regard. We have received several trade missions during the last year in different fields. A sign which shows a great interest knowing more about the possibilities for trade and business in Ghana,” he .

The ambassador announced that in December this year, Egypt would be hosting a yearly African Investment Forum to link the businessmen in the continent together and said he was sure that would boost the Egyptian -Ghanaian business.

Heider said they had extended an invitation to President Nana Addo Dankwa Akufo-Addo and they would be very happy to receive him in Egypt, especially during the country’s chairmanship of the AU.

“We have also extended an invitation to the Speaker of Parliament, which he has accepted, and we hope it takes place soon,” he said and added that “our presidents have bilateral meetings on two occasions on the margin of the AU Summit, and the Ministers of Foreign Affairs also met and consulted on similar occasions,”

Touching on the Day’s celebration, Heider said he was grateful to all those who joined them to celebrate the 66th anniversary of the 1952 revolution in Egypt.

‘The context of the relationship between Ghana and Egypt will always be a strong foundation that we are proud of and keep recalling with admiration and appreciation,” he stated.

“In this context, I keep repeating that we are greatly proud that the First Lady of Ghana after independence was Egyptian and through this many others bounded families from both countries and served to bring its peoples closer,” he added.

Heider acknowledged the presence in particular of Madam Samia Nkrumah, an icon of the historic relationship between the two countries and a great example a long and fruitful historic period.

“For this reason, it’s a blessing and a great advantage to be an Ambassador of Egypt in Ghana. Mentioning this while I am ending my tour of duty in this friendly country makes me very keen to convey a message of appreciation and gratitude to the Ghanaian leadership and officials who also proved to be there and willing to push our relations forward,” he stated.

“I will certainly miss the good people of Ghana, their sense of , hospitality and their love for football,” he stated.

He thanked all those who made his stay pleasant and fruitful during his term of duty in Ghana.

In his address, the Minister of Sanitation and Water Resources, Kofi Adda, said the signing of an agreement of political consultations between the two countries in 2017 had unleashed renewed impetus for the holding of a Permanent Joint Commission for Cooperation (PJCC).

Adda observed that the ambitious economic transformation plan launched by the Government of Ghana had provided a new drive for sustainable economic growth and development of the country.

The minister urged potential Egyptian investors to take advantage of the conducive environment established in Ghana to set up manufacturing and agro-processing plants, which would ultimately create a diversified and robust economy and further cement the fruitful partnership that the two countries currently .

The ceremony was attended by members of the diplomatic corps, the Egyptian community, other ministers of state, Members of Parliament (MPs), traditional and religious leaders, the academia and business executives.