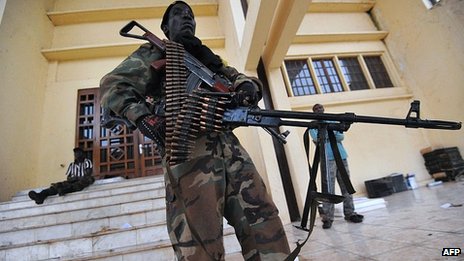 The leader of rebels who have seized the capital of the Central African Republic says he is suspending the constitution and dissolving parliament.

Michel Djotodia said there would be a transition period until "credible and transparent" elections, during which he would "legislate by decree".

He added he would uphold a peace deal that promises elections in three years.

Following the takeover, the African Union has suspended CAR and imposed sanctions on rebel leaders.

About 5,000 Seleka fighters swept into the capital Bangui on Sunday after the collapse of a power-sharing deal - the Libreville Accord.

The deal collapsed when Seleka withdrew its members from the government.

"I consider it necessary to suspend the November 27, 2004 constitution, to dissolve parliament as well as the government," Mr Djotodia said in a statement to reporters.

The statement could not be broadcast due to power cuts, Reuters reported. and instead was recorded and issued to journalists.

"During this transition period which will lead us to free, credible and transparent elections, I will legislate by decree."

He added: "We will lead the people of Central African Republic during a three-year transition period, in accordance with the Libreville Accord."

Earlier, South African President Jacob Zuma said at least 13 South African soldiers were killed in the battle against the rebels on Sunday.

The troops had been stationed in Bangui to support government forces.

It is the heaviest loss of life for South Africa in a single battle since it became a democracy in 1994.

Looters and armed gangs are reported to be still roaming the streets of Bangui.

The UN says tens of thousands of people have fled CAR into neighbouring Democratic Republic of Congo and Cameroon.

CAR has been unstable since its independence from France in 1960 and is one of the least-developed countries in the world.