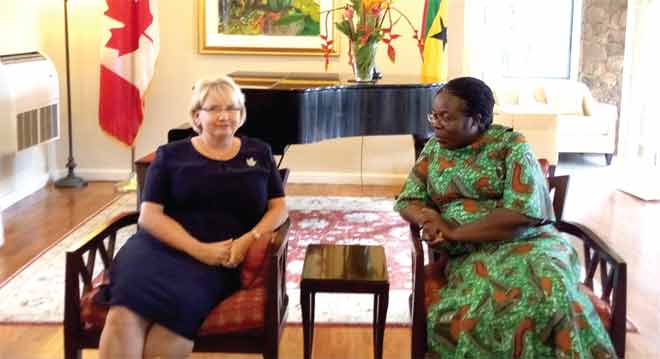 Canada and Ghana have had a very important and long-standing partnership and the two countries continue to work towards further strengthening the relationship for their mutual benefit.

Speaking with the Daily Graphic in an interview at her residence in Accra, she said Canada’s area of focus in Ghana had been water, agriculture as an engine for inclusive and sustainable growth, improving access to and use of affordable and nutritious foods, sanitation and hygiene services.

The High Commissioner said Canada was also concerned about the status and empowerment of women in the country, the well-being of girls and gender issues in general, as well as forced marriages and sexual and reproductive health.

She recalled the relations between the two countries which extended to the international level, mentioning in particular the United Nations, La Francophonie, of which Ghana is an associate state, and the Commonwealth, saying that the two countries have co-led initiatives to improve the rights of women and girls, and taken a strong stance against child, early and forced marriage.

She noted that a lot of work had been done in the area of capacity building and improving on the well-being of the people, saying they have also concentrated on programmes and projects in the north.

“Our work in Northern Ghana, particularly in the area of food security, education and water, has been significant,” she noted, adding that in her first few months here, she had been struck by the scale of the work and of the results achieved together.

Madam Cameron was happy to note that bilateral trade was at its highest and was growing in both directions.

In 2016, she said two-way merchandise reached $265.3 million and mentioned Canada’s main exports as cereals, vehicles and parts, machinery, miscellaneous textiles among others.

She said the main imports from Ghana included cocoa, wood and vegetable products.

Madam Cameron recalled that mining and energy investment had always been important part of the relations between the two countries.

With over $2 billion in investment, she noted that Canadian mining companies were employing thousands of Ghanaians, and promoting high ethical standards in the industry and contributing to local value chains, and to community development.

The High Commissioner disclosed that Canada was among the top five bilateral donors to Ghana, saying that in 2015–2016, the government of Canada contributed more than $135 million in official development assistance to Ghana.

The High Commissioner noted that there were currently over 1,300 Ghanaians studying in Canada.

Over 30 Canadian institutions and more than 1,500 people participated in Canada’s ninth annual Education Fair which took place in Accra in January this year, she recalled.

The High Commissioner was also happy that Canada and Ghana shared a commitment towards peacekeeping and the promotion of human rights.

She said Canada also provided training for the personnel of the Ghana Armed Forces through the Department of National Defence’s Military Training and Cooperation Programme, which sought to enhance peace support operations and interoperability among Canada’s partners, and expand and reinforce bilateral defence relations.

She said this year, Canada would welcome nearly 300,000 permanent residents, as well as over 20 million visitors, including those from Ghana. “We issue thousands of visas every year,” she added.