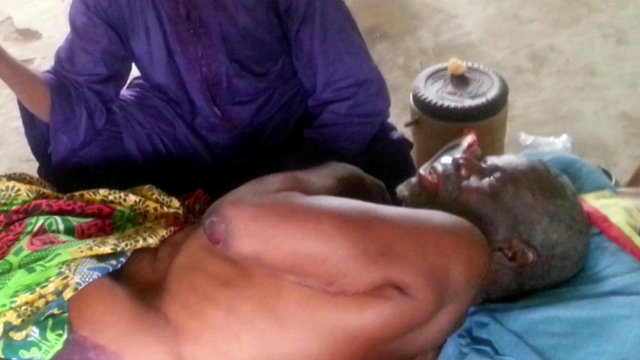 Nigeria's army has said it seized rocket-propelled grenades during last week's fighting in Baga - believed to have been one of the first times Boko Haram has used heavy weapons.

It says 37 people were killed, while others maintain at least 185 died.

The army says 30 members of the Boko Haram Islamist group, one soldier and six civilians died.

The Red Cross has backed local officials who say the figure is higher but they have not been into the town.

An army statement said three rocket-propelled grenade launchers had been recovered, along with bomb-making material.

The previous most deadly incident of the three-year Boko Haram uprising came last year when at least 160 people were killed in co-ordinated bomb attacks in the northern city of Kano.

The group is fighting to install Islamic law in the predominantly Muslim north of Nigeria.

Baga is close to the border with both Chad and Niger and a multinational force from the three countries was attacked, its commander Brig Gen Austin Edokpaye said.

The Red Cross is still trying to gain access to the town to help those affected by the violence, national co-ordinator Umar Mariaga told the AFP news agency.

Local MP Isa Lawan told the BBC Hausa service that "what happened is Baga is sad and beyond description".

"We have already started despatching relief materials, including building materials and food stuff. We want to make sure that people get the necessary assistance to start rebuilding their homes."

He said there were "many versions of what happened. Everyone tells his own version. So no-one is sure which version to believe.

"Many people died. But the figure of casualties given by the people of Baga is 185."

A resident who did not want to be named told AFP:

"Baga is still under military siege... The town is at a standstill, with little food and water, which has forced even those of us that stayed behind to start leaving."

One unnamed rescue official said that 40% of the town had been destroyed by fire following the clashes.

But Brig Gen Edokpaye disputed this, saying Boko Haram's weapons had exploded, causing "fire to about 30 thatched houses in the predominantly fishing community".

He said that five militants had been arrested.

Many of the town's residents fled during the clashes and say they returned to find their homes burnt to the ground.

Bodies were still being found and buried on Monday, two of the town's inhabitants told BBC Hausa.

One eyewitness told the BBC that the fighting started when gunmen entered a video-viewing centre, looking for a man, who then fled.

The militants opened fire, attracting the attention of nearby soldiers, who were initially overpowered, before returning with reinforcements, leading to a fierce gunbattle, he said.

Correspondents note that the Nigerian military often plays down the number of people killed in clashes with militants.

Communications with parts of northern Nigeria are difficult since mobile phone masts were destroyed by militants.