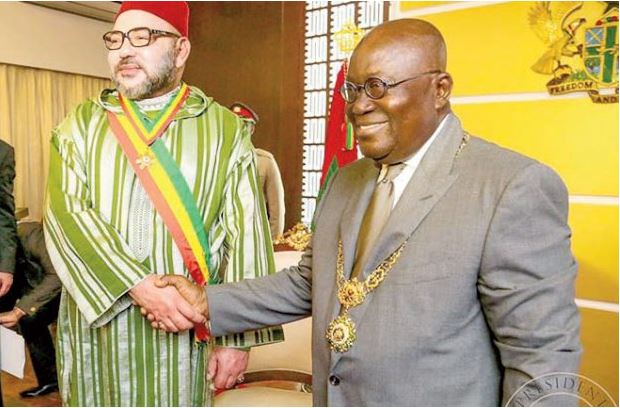 King Mohammed VI of the Kingdom of Morocco and Ghana’s President, Nana Addo Dankwa Akufo-Addo, have both stressed that Africa’s wealth must benefit Africa.

The two leaders believe that Africa must be proud of its human potential, resources, cultural heritage and spiritual values, and that the future must bear loudly this natural pride, the Charge d’Affaires of the Embassy of the Kingdom of Morocco, Mr Abdelouahed Bekki, has emphasised.

Mr Bekki, who was addressing a reception in Accra to mark the 20th-anniversary celebration of the Ascension to the Throne of His Majesty King Mohammed VI of the Kingdom of Morocco, said this would envision Africa’s future with confidence and serenity, counting on its own wealth and the hands of its citizens.

He said the Moroccan private sector was present in Ghana through key sectors like fertilisers for agriculture, energy, construction materials, banking and insurance.

Mr Bekki said the implementation of 25 agreements, signed during the official visit of King Mohammed in 2017, would “certainly further contribute to the reinforcement of our bilateral relations”.

The Charge d’Affaires noted that many Ghanaians had benefited from Moroccan scholarships, adding that the beneficiaries were joined each year by 70 new students, a quota that would have to be worked on to further encourage this virtuous trend.

Mr Bekki, therefore, announced that for the 2019-2020 academic year, 20 more scholarships would be granted to Ghanaians interested in pursuing vocational training curricula in Morocco.

He said Morocco had realised many achievements in the field of infrastructure, such as the largest port in Africa and the Mediterranean Sea, the first fast train in Africa and in the Arab world, the largest solar power plant in the world, an extensive network of highways, tramways and two of the biggest car manufacturers in Africa over the past 20 years.

Mr Bekki congratulated Ghana for being chosen by the Assembly of Heads of States and Governments of the African Union (AU) to host the secretariat of the African Continental Free Trade Area (AfCFTA).

This, he noted, was yet another recognition of Ghana’s role and commitment to the AU and prosperity.

The Charge d’Affaires explained that Morocco had ratified the agreement establishing the AfCFTA, and strongly believed that it was a milestone and a historic move on the path to realising the continent’s long-standing aspirations of comprehensive intra-African exchange.

Mr Bekki said it was high time Morocco and Ghana took their bilateral ties up to higher levels.

He observed that “trade between our two countries did not make the most of the full potential offered by the two complementary economies.

“We all need to extend more efforts to develop and grow existing businesses and capacities and explore new opportunities in trade, transportation, tourism, mining and energy,” he added.

Ghana’s Minister for National Security, Mr Albert Kan-Dapaah, said in pursuit of its industrialisation drive, the government of Ghana had over the past two-and-a-half years launched key policies and programmes aimed at improving the socio-economic circumstances of its nationals.

He said as the government worked assiduously to attain its strategic vision of a Ghana Beyond Aid, it would continue to sustain and improve the business environment in the country to ensure that the country remained a very attractive destination for foreign investors, including Moroccan entrepreneurs, whose interests in Ghana continued to surge.

Mr Kan-Dapaah was happy to note that “We in Ghana have looked on with admiration, the notable reforms which have so far taken place in Morocco during the reign of King Mohammed VI”.