The Nayiri Palace: Embodiment of chieftaincy- identity of Mamprugu Kingdom 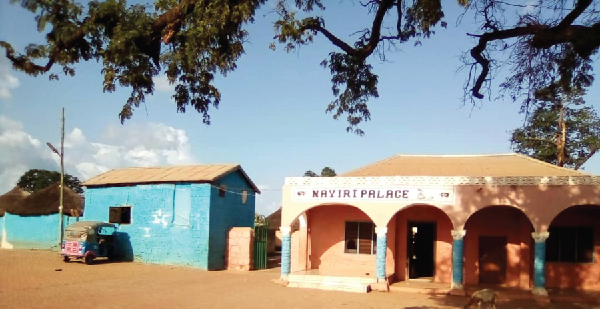 The Nayiri Palace is the traditional seat of the Overlord of the Mamprugu Traditional Area.

Located in the heart of Nalerigu, the North East Regional Capital, the palace is a centre of attraction and cultural activities.

It derives its origin from Na Yiri, which literally means “chief’s house” in the Mampruli dialect.

Though in Mamprugu every village has a chief’s house, the overlord or paramount chief is referred to as the Nayiri because he is the embodiment of chieftaincy and authority.

In effect, that verbal identification of the king and the chief’s house suggest the king’s presence in the house of his royal chiefs  an omnipresence which is thoroughly consistent with the Mamprusi ideology of kingship.

The palace has been constructed with a round layout using traditional building materials.

It consists of round rooms which house the Nayiri’s wives and other women, while rectangular designed rooms house men.

Inside the palace compound is a small structure where the Nayiri receives visitors, particularly on days he is forbidden to step out.

Also, there is a mini shed beautifully designed with the traditional emblem outside the palace, where the overlord sits in state on occasions such as the enskinment of chiefs and cultural festivities.

On reaching the premises of the palace, one is greeted with the bust of an elephant, which is the emblem of the Mamprugu Kingdom, mounted at the entrance.

A drawing from anthropologist Susan Drucker-Brown’s work in the 1960s next to an aerial shot of the palace in 2017 shows how the layout has been adhered to for the past 60 years.

It is the Mamprusis’ tradition to abandon the palace after the passing of the Nayiri.

The chieftaincy then moves to the other “gate”, and when the new Nayiri is enskinned, they would restore their gate’s palace.

The palace of the Mamprugu Kingdom has been in existence in Nalerigu since the 1690s.

The issue of renovation of the palace has been a matter of contention for the past centuries, as many believe the traditional component of the architecture would be lost when rebuilt or renovated.

However, under the reign (since 2004) of the current Nayiri, Naa Bohagu Mahami Abdulai, the palace has seen some nice renovations.

While anyone can see the palace from outside, one does not simply enter the palace. To visit the overlord, one must find a local representative or an elder of the palace to set up a visit to the king and be escorted in.

A gift or “kola” for the chief is expected, as well as for the guide.

Narrating the history behind the palace to the Daily Graphic, a Traditional Historian, Badigamsira Abdul-Majeed, explained that “one of the great warriors of Mamprugu, Naa Tohugu, moved the traditional capital of the Mamprugu Kingdom from Pusiga to Gambaga around 1200-1300s.

Naa Atabiya also moved the traditional capital from Gambaga to Nalerigu in 1690-1742 marking over 50 years’ rule as king of the Mamprugu Kingdom”.

He said Mamprusis, particularly members of the royal clan, regard the king’s palace as the gathering-place of the royal ancestors, adding that for a Mamprusi royal chief, the palace is more than a place to which his spirit will return.

Mr Abdul-Majeed, however, called for the building of a modern befitting palace for the kingdom, saying “I think if we go by the same architectural design, the traditional component of it will not be lost.”