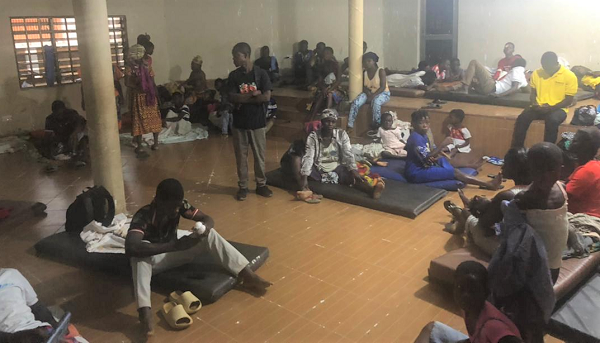 Ghanaians, home and abroad, have stood solidly with the broken community of Appiatse, a small farming and mining township near Bogoso in the Western Region of Ghana which was struck by an explosion last week Thursday.

I was completely in the dark that Thursday about the disaster. Then a relation outside the country called me late that day to ask what was going on in the Western Region.

I got to know the massiveness of the tragedy the day after listening to and reading the news.

Nine days on, nearly all the details of the explosion, its causes, effects and the commiserations have been unfolding, thanks to the prying eyes of the media.

What is even more commendable is the swift manner in which the hierarchies in government, Parliament and chiefs in the area, corporate Ghana, churches, the medical fraternity and individuals have been touched.

Sympathisers have been moved to action practically every day since the incident.

All concerned have exhibited proactive kindness, love and empathy towards the injured, the bereaved families, as well as the generality of the community.

Already, donations are coming in for the reconstruction exercise to begin so that the people can get back to the active lives they led before the disaster.

The benevolence of the Ghanaian is not at all in doubt. The hospitality shown to the people of Appiatse will be remembered for a long time to come.

However, in the midst of all the commendations, one cannot lose sight of the disturbing actions of those who tend to downplay the safety and sensitivities of the affected people in times of such tragedies with picture or video taking.

Sometimes for the fun of it others are quick to post their pictures on social media, not thinking about the hurt of others.

It is becoming common that most often people rush to such unfortunate scenes with their phones to snap pictures, thinking that what has happened is someone else’s business that deserves to
be shared.

Unfortunately, in the Appiatse case, news reports have it that some of those who were taking pictures and videos met their untimely deaths in the subsequent explosion that followed the initial one.

The habit of making light of other people’s predicament and putting them in the public space can become quite upsetting and needs to be admonished. The lessons here could be many.
With the Appiatse case, for example, perhaps the lives of those who rushed to the scene to take pictures when the initial explosion occurred could have been saved if they desisted from rushing to the scene to take pictures.

At all times, it is better to leave the experts with a trained mind to take charge of situations.

Think also about the case of pictures taken at scenes of motor traffic accidents, sometimes with people trapped in mangled vehicles or body parts strewn all over at the scene.

What purpose would pictures of such tragic scenes serve the public?

Then also are cases of fire outbreaks and gas explosions of which we get many reported every now and then.

We tend to get people trooping to such scenes to take pictures, when perhaps the best would have been to call the police or fire service to attend to the situation.

The stories one gets to hear about the number of people who meet their death or get injured at such disaster scenes do not seem to deter people.

Recently, in a gas cylinder explosion in a home that was reported on radio, the individual involved rather escaped unhurt, but those who rushed to the house got injured and one person died.

One needs to put oneself in the shoes of relatives and friends of disaster victims whose pictures are shared on social media even before the family is informed by the police.

It can be disturbing and even a shock to chance on any such unexpected information.

Needed education is overdue to instill in people the sensitivity of other people’s feelings. How do we go around it?

The media can be a great outlet to educate people on such issues. One can also look at the effective role of churches and mosques.

They can use their platforms to educate while condemning the callous acts of filming tragic scenes just for the benefit of social media.

Let the unfortunate lessons from Appiatse, where some of those who rushed to the scene to take pictures also lost their lives in the explosion, serve an impactful lesson to all.