Breast cancer — A battle we should not lose 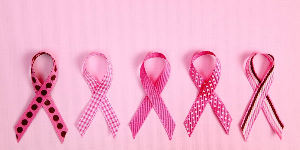 Breast cancer — A battle we should not lose Follow @Graphicgh

In the midst of so much awareness creation on breast cancer, it is heart wrenching to learn that the disease is on the increase.

It is not only killing older women but young ones too.

Over the last five years, if not more, one has seen a high level of awareness created, coupled with supporting education on breast cancer in this country.

Individual self-examination and routine breast x-rays (mammogram) have been adequately explained and encouraged.

It is however regrettable that a deadly disease which experts have drawn and continue to draw attention to is being ignored. In a recent radio discussion by some experts on the topic, one learnt that whereas last year the average cases reported in hospitals were around two hundred, as of this year, this number has doubled. Meanwhile, an average of 250 surgeries is being conducted each year. Has the message that early detection can save lives not been loud and clear enough?

Once again, the month of October is here and globally it has been declared Breast Cancer Awareness Month. Women all over the world are being encouraged to listen to their bodies, do self-examination and get screened to minimise the unnecessary loss of lives to breast cancer.

The statistics on our local situation are very disappointing. According to the records, it is the most common cause of cancer affecting women even though one to two percent of breast cancers are found in men.

We have been told that close to 3,000 breast cancer cases are diagnosed annually. Out of this number, one in eight of those diagnosed will not survive the disease.

What is worrying about the situation is the fact that 60 to 70 per cent of the women who report to the hospital are said to be going too late as the cancer cells would have spread to other parts of the body. At that point, the disease can only be managed and not cured.

So why is it that in the midst of all the awareness creation and with offers of free screening, some women are reluctant to take advantage even when they might have seen changes in their breasts? Fear, misconceptions, myths, stigmatisation are some of the reasons why.

It has been argued that a proportion of the women who at some stage realise changes in their breasts resort to self or herbal medication. This does nothing but to worsen their cases. There is also the mountain of myths and misconceptions which block people’s minds from seeking help. There are some who believe that their suffering is nothing but demonic and so refuse any form of orthodox treatment. By the time they realise, the cancer has spread to other parts of the body.

Then there are also those who would suffer and die in silence due to fear.There is usually the raging fear of having their breasts removed or worse still go through chemotherapy treatment.

But there are many more fears, including stigmatisation. We live in a society where we are ready to ridicule rather than offer solutions. We jump to name callings and gossips at a time when fellow human beings going through difficult times need our love, care and guidance.

Global HIV AIDS campaigns and specific focus on stigmatisation a few years ago helped in bringing HIV AIDS sufferers out from hiding to live with positive minds in the society. Once they were out of their hiding places, they were able to confidently access anti-retroviral drugs and live better lives. Survivors then were coming out to share their experiences.

Perhaps, we can begin to do the same with breast cancer.The time has come for us to demystify the disease, especially with the good news that it is curable when detected early.

Thankfully, we have some breast cancer survivors around who are coming out in the public to share their good stories. We need many more such ambassadors to come out to inspire women, particularly those suffering in silence. Women should not wait till another October to be educated on breast cancer.

We need to continually do self-examinations and seek immediate medical guidance when necessary.

But above all, we should aim to be our “sister’s keeper” whether they are family or not. We should encourage one other, be it neighbours, work colleagues, church members, old school mates and whatever groupings, to listen to our bodies and check our lifestyles as the latter has also been linked to cancer.

No woman should die of breast cancer in the midst of such plentiful awareness. Screening is necessary now than later for procrastination is always a thief of time while a stich in time saves nine.