Accra sky train — We are on the move 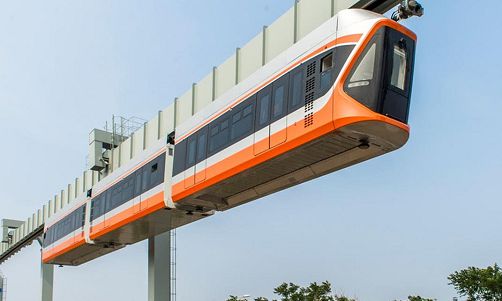 Accra sky train — We are on the move Follow @Graphicgh

Anything to do with easing the traffic irritations in the city of Accra with the attendant nuisance of commercial motorbike riders, popularly known as Okada, is celebrated news

painful productive hours spent just to cross from one end of the city to the other to conduct business or for leisure are all costly and the stress is becoming too harmful to one’s health.

That is why intentions for an intervention in the form of a sky train for Accra and possibly across the country is welcome news.

According to a publication in the Daily Graphic of Saturday, November 10, 2018, the government has finally signed a Memorandum of Understanding (MOU) with a South African Consortium for construction works associated with a sky train project to commence in January 2020.

According to a release from the Directorate of the Presidency and which was published by the Daily Graphic, the Minister of Railways Development, Joe Ghartey, signed the MOU for Ghana while officials of the Consortium for the African Investment Sky Train Consortium.

One can only pray that the nine months detailed feasibility concessionary agreements approval process by Cabinet and Parliament respectively would not hit any hitches. Should all go well according to plan, one is hopeful that come January 2020, the priorities that this government has set for itself to rehabilitate, revive, expand and get this country a functional railway system would be coming into fruition. Jobs across the country would be the end result.

However, all this should not just be news for the ears only. We should see some concrete and lasting results translating into of our public transportation system, easing of traffic in the capital and generating jobs for Ghanaians across the country. In 2014, we hailed the introduction of over 200 commuter buses brought in to help with convenience commuting particularly from the suburbs into the central business district of Accra.

The belief at the time was that people would park their vehicles coming into the central business district and patronise the ease and convenience of the buses. It was gladsome news and good to see the visibly regular green buses with their own dedicated bus lanes on our roads. Those who patronised them did testify at the time the difference the Ayalolo buses made in their daily commuting.

Sadly, today, all that has been water under the shed. One does not see the green buses anymore. We are told that they have been grounded because they have broken down and there are no funds to put them back on the roads. That is a case of someone slackening in their duties to manage and see to the profitability and sustainability of that laudable initiative. Now, jobs have been lost and of the commuters who relied on convenient and efficient public transport are back to square one struggling daily for reliable and efficient public transportation system to and from work.

Lessons from the past

All that should be lessons going forward as one looks forward with so much anticipation for the soon to arrive sky train. Hopefully, we would not be shortchanged and that in no time, we would have a sustainable railway infrastructure that functions well to eventually link the rest of Ghana. rail system is something we once enjoyed in this country and just took for granted.

Memories of travelling in comfort by rail in the sixties and the seventies are still fresh. In those days, railway service was a pride in our transportation system linking the capital to some major towns and cities across the country. Recollections as ten to in a boarding school in Kumasi, our parents and our house mistresses had no problem putting us on night trains, then called “sleepers” to and from various parts of the country to in Kumasi. We enjoyed the journeys on these trains, clean and tidy with easy comfortable seats to sleep through the journey. One can look back, decades later, with so much nostalgia.

As an idiomatic expression goes, a journey of 1000 steps starts with one, the signing of the MOU for a sky train gives one a lot of encouragement. We can only put our minds, our thoughts and weights behind the move and pray that it would be a success for us all. Indeed, a sky train would be a legacy for years to come.

We are in a hurry to see the transformation and to welcome Ghana’s first sky train.