You ran home crying because your friend beat you? 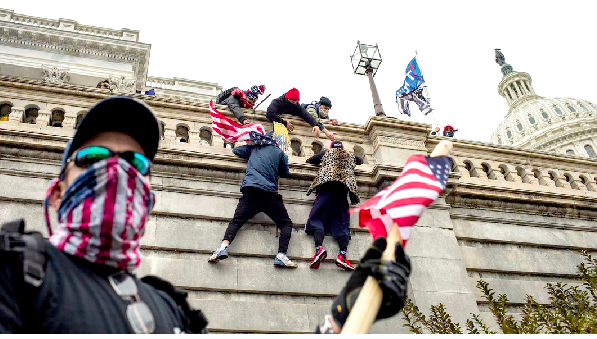 • The storming of Capitol by Trump’s men
30.5k Shares

While enjoying my conversation as a young Captain with my senior colleague neighbour at his car port, as was our Saturday morning routine, his six-year-old son Kofi, came running and crying, with his mother in hot pursuit.

Instinctively, my friend offered Kofi immediate protection and then demanded from his wife, why that early morning hot chase!

“Ask him what he has done!” The fuming mother retorted.

Kofi’s submission was “I was playing with my friend Kojo and he beat me, and I started crying.

“When I told Mama, she got angry and wanted to beat me, so I ran to you!”

My colleague exploded asking, “What? You allowed your classmate to beat you and you came home crying?”

When the unexpected smack landed like lightning on his back, Kofi took to his heels like Usain Bolt.

It was a clear case of “from frying pan to fire” from mother to father.

My colleague then decried how soft kids of the day were.

He added that, as a little boy his son’s age, if he lost a fight at the beach in his fishing village, he dared not tell his parents for fear of reprisals.

He simply prepared for a return fight!

A week later, while enjoying our chat, Kofi came beaming with smiles with his shoulders high and feeling pea cocky!

When asked why he was in such a jubilant mood, Kofi gave a commentary of what had just transpired.

He had won the return match!

“Good!” My colleague exclaimed. “This is what I want you to do. You cannot grow up in barracks and be a weakling, coming home to tell your mother you have been beaten in a fight!”

Why this story which happened over 40 years ago?

By the way, Kofi has grown to be a fine senior military officer!

In the aftermath of Ghana’s Elections 2020, I heard and saw on radio and TV threats by some aggrieved Ghanaians to go to the United Nations (UN), Commonwealth, African Union and other international organisations to present their grievances for solutions.

I could not believe it!

Over 60 years after independence, why do we tell the whole world that we cannot solve our own problems except the international community steps in, in the first instance?

We have always prided ourselves as the first black African country to attain independence from colonial rule in 1957.

Why then do we, the “Black Star of Africa” help reinforce the conviction some hold that, the black man cannot rule himself?

In any case, don’t we know that, there are 193 countries in the UN?

Assuming every country after elections hurtled to the UN with grievances including alleged rigging for resolution, what would the UN Headquarters be like?

Arguably, the outcome of Elections 2020 in the world’s self-proclaimed leading democracy, the USA, has been worse than what we experience in Africa.

On January 6, 2021, there was an insurrection and a violent attack inspired by Trump on the Capitol Hill at the time Congress was sitting to ratify their 2020 Election results making Joe Biden the President.

Americans described it as a shameful tragedy which flew in the face of whatever good democracy it was credited with.

Despicable as it was, did the US run to the UN like little children to help them solve their problem?

Called the father of the English Language for publishing the first English language dictionary in 1755, Dr Johnson stated as follows.

I commend this to our politicians! Use your education to maturely solve Ghana’s problems for our utilitarian good!

If Ghana were a human being, he or she would have retired in 2017 at the compulsory retiring age of 60.

We cannot continue not matching our actions with our words.

The UN/Commonwealth, etc., are not there for referral of cases in the first instance of countries’ problems, which they can solve themselves.

Let us learn from the example of six-year-old Kofi, that running to your parents crying because a friend has beaten you is not the best solution to problems.

While the UN/Commonwealth/AU cannot beat Ghana like Kofi’s parents beat him, we may be politely told to be our age and go solve our problems ourselves!