Why Ghana’s inflation is rising, impact on living conditions 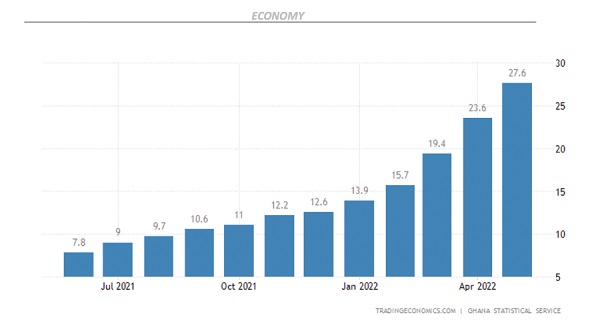 Ghana’s inflation has hit a record high since the beginning of the year 2022 Ghana’s annual inflation rate accelerated for the 13th consecutive month to 29.8 per cent in June of 2022, from 27.6 per cent in May, breaking the upper ceiling of the central bank’s target band of six per cent to 10 per cent for ten months and this is the highest since 2004.

The surge in inflation may be as a result of several factors, the recently introduced 1.5 per cent E-Levy, perennial depreciation of the cedi, increase in Bank of Ghana policy rate to 17 per cent, continuous increases in petroleum prices, increase in demand for both imported and local food unmatched by supply.

Evidently, the inflation in Ghana is really caused by fiscal expenditure and non-monetary issues.

An import driven economy like Ghana cannot consistently control inflation because the taste of the Ghanaian for foreign goods and service is part of the problem.

Government expenditure needs to be retargeted to drive food distribution cost parity, supply and storage. The Central Bank seems to be using monetary policy rate (19%) to mop up excess liquidity and cash from the economy which unfortunately has failed.

Reasons for sharp surge in Inflation

Workforce of about 45 per cent directly or indirectly employed in the agriculture sector makes the sector a key contributor to the growth of the economy. However, farming, poultry, fisheries and forestry are at a decline due to lack of mechanisation and access to finance for smallholder farmers causing local food prices to increase across the country.

It is very surprising that with the introduction of several farmer friendly agriculture policies by the Ghana government, food prices continue to see very fast paced increase in price making cost of living very high. Infact , it is the case that what policy makers say is quite different from the impact these inflationary conditions have on the people.

Frequent increases in petroleum prices is one of the reasons why inflation is surging. Farmers across the country are having higher yields/harvest, however, they are unable to transport all their produce to the marketplace because of the very high cost of transportation.

Deteriorating rural roads especially in the farming areas is another reason why food stuff does not get to the towns and cities where they are needed most. Torrential rains in the past 2 to 3 months and the resultant flooding has rendered a lot of roads in the hinterland unmotorable.

All these adverse factors caused a surge in prices of produce and the resultant rise in the rate of inflation.

The impact lack of artificial fertilizers for farmer has on their produce cannot be underestimated especially its impact on food prices.

By some estimates, close to 80 per cent of local smallholder farmers could not afford local fertilizer even with government subsidies.

The problem with fertilizers is the fact that they are usually imported, and the continuous depreciation of the Ghanaian cedi against the dollar by some 17 per cent since the start of 2022 compounds the problem with inadequate supplies. On the other hand, smallholder farmers are not equipped with the right technological inputs and techniques of modern-day farming to increase crop cultivation and yields.

In marketing farm produce, it is Its very evident that most Ghanaians are used to buying foodstuff in the open marketplace. So when these foodstuff cannot get to the consumers in the cities because of high transport cost, bad road network, lack of storage facilities and sometimes lack of cargo vehicles, they end up either being destroyed or sold at a discount.

The current economic situation of in Ghana can be solved through a revamp of the agricultural sector. Agriculture is undoubtedly the most important sector in our economy and employs almost 60% of our citizens. However, budget allocation and government expenditure does not reflect same in the sector.

Moreover, government’s initiative of planting for food and jobs ($641m expenditure) has not significantly impacted the agricultural sector so foodstuff are made affordable for the average citizen as compared to the Operation Feed Yourself (OFY) flagship government program of the 1970s.

• Government policy initiative on Planting for Food and Jobs should be reviewed to make farming/fishing very attractive and lucrative for all Ghanaians.

• Government should invest into mobile storage trucks for transporting farm produce from rural areas to the cities where they are needed most.

• Government should invest into storage facilities at major market centers to store and preserve farm produce for market women.

• Government should invest in rural farm roads to connect market districts across the country.

• Promote the involvement of farmers and fishermen in policy design, planning, implementation, monitoring and the assessment of its impact on their output and living standards

The writer is Financial  & Economic expert. E-mail: This email address is being protected from spambots. You need JavaScript enabled to view it.