Who takes the glory? 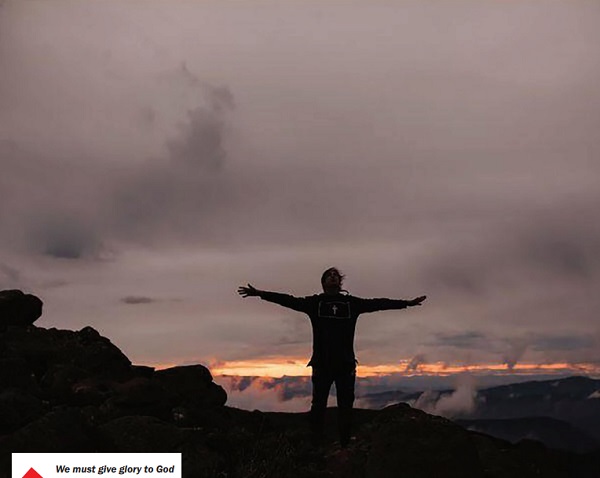 The service was in progress when the German young woman got up, took her bag, and walked out of the church.

I wanted to know why, so I followed her out—in time to see her entering her car.

The many NGOs in the Tamale metropolis attracted expatriates who sometimes attended church.

“Excuse me,” I approached and asked, “Please, are you going away?— the service is not yet over.”

“Yes, I’m going away,” she replied, and I could detect that she had more on her chest to pour out.

“Did you listen to the preacher’s claims?” she asked. Before I could answer, she unleashed her criticisms of the sermon. “How can the preacher say that we should give all glory to God for our achievements?”

That, indeed, was the gist of the sermon. “Whatever you do and achieve,” the preacher said a moment earlier, “give God the glory.”

This statement from the preacher infuriated the German young woman.

“Why can’t I,” she asked, pointing to her chest, “take a bit of honour for myself for what I achieve?”

I only stared at her in disbelief as she plodded on: “What is wrong if a person takes a bit of glory for their inventions, accomplishments, and successes?”

No matter how gently I tried to help her appreciate the preacher’s exposition on the glory of God, she wouldn’t take it, so she drove off.

I detected a similar attitude recently on radio when a work-ethics coach declared, “I don’t need the favour of God.”

His proposition was, “Work hard, use your brains, utilise your abilities and you won’t need God’s favour.”

Certainly, we must work to earn a living, using God’s resources and opportunities. But to declare, “I don’t need God’s favour” is pride of the worst kind.

To achieve our highest dream, we may have everything going for us—skills, entrepreneurship, people and capital. But, without God’s grace and favour, everything can fall apart.

Our very life depends on God’s grace and favour, which is why we give him the glory. For, even a tiny Anopheles mosquito can stop you in your tracks!

While we traverse the world in pursuit of our dreams, misfortune can halt us. We need God’s favour to combat the many adversities we encounter.

Not needing God’s favour or grace is an indirect way of setting God aside. It translates into not acknowledging God for our achievements, in order to take the glory for ourselves.

God’s glory is his honour, splendour and magnificence—and it belongs to him alone. Anyone who takes his glory is turning himself into an idol.

King Herod did that. After delivering a powerful public speech, the people gave him a standing ovation, shouting, “This is the voice of a god, not of a man!” (Acts 12:22, 23).

The scriptures say, “Because Herod did not give glory to God, an angel of the Lord struck him down, and he was eaten by worms and died.”

It is the height of human arrogance to take God’s glory. For God has said, “I am the Lord; that is my name! I will not give my glory to anyone else, nor share my praise with carved idols” (Isaiah 42:8).

People appreciate us for what we do—and that’s all right, for appreciation and affirmation spur us on to higher achievements.

But, appreciations and affirmations, if not handled in humility, can ignite the pride in us that is always waiting to spring into action to cause our downfall.

One woman said, “My habit is to compile all the praises I receive for my deeds and present them to the Lord, for they belong to him.”

That is a wise way of handling the praises we receive for our achievements—pass them on to God. One danger for grabbing God’s glory for ourselves is that we would subtly patronise it, longing for people to honour us for what we do.

People who praise us today can bring us down tomorrow. Hence, Jesus “would not entrust himself to people, for he knew all about human nature; he knew what was in each person’s heart” (John 2:24, 25).

In Greek tradition, it is said that the king employed the services of a special aide whose duty was to constantly remind him of his humanity.

Intermittently at public gatherings, this aide would whisper to the king, “Remember, O king, that you are human; you are not a god!”

That role, I believe, is played by God’s Word that reminds us that to God alone belong all glory and honour—no matter our achievements.

Humility is the disposition with which to combat the temptation to assign to ourselves glory and honour that belong only to God.

To God be the glory; great things he has done!

The writer is a publisher, author, writer-trainer and CEO of Step Publishers. E-mail: This email address is being protected from spambots. You need JavaScript enabled to view it.