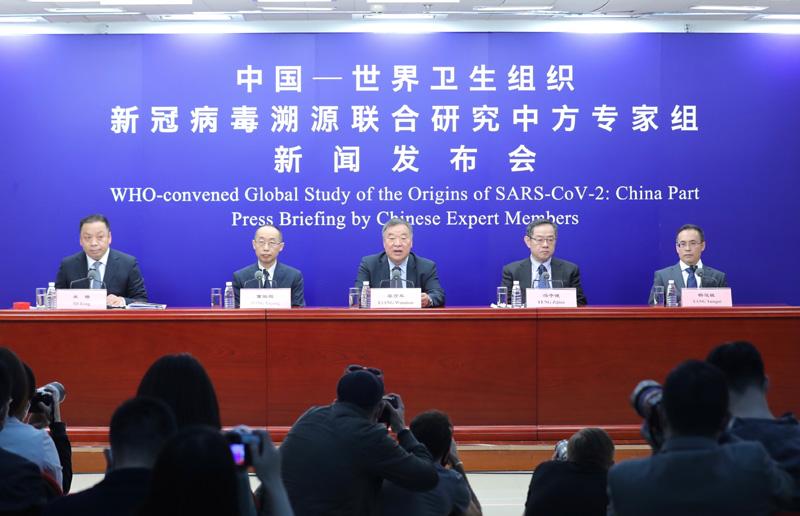 Since the COVID-19 outbreak, China, upholding the vision of building a community with a shared future for mankind, provided information to the World Health Organisation (WHO) and relevant countries in a most timely fashion.

It released the genome sequence at the earliest possible time, shared control and treatment experience with the world without reservation, and provided more than 800 million doses of vaccines to more than 100 countries, making major contribution to protect global public health.

Since last year, it has twice invited WHO experts to China for origin-tracing research. In particular, leading experts from 10 countries, including the United States, the United Kingdom, Japan and Australia, formed a joint expert team with their Chinese counterparts earlier this year.

They carried out a 28-day joint research in China and concluded that the hypothesis of lab leak was extremely unlikely.

They also recommended further research on earlier cases around the world and further study of the role of cold-chain and frozen foods in viral transmission.

These important conclusions were reached on the basis of following WHO procedures and rigorous scientific methodology.

They are authoritative and science-based. They should be recognised, respected and upheld and should be the basis for the next phase of global origin-tracing.

Chinese experts also took the initiative to submit to WHO China's proposal on the second phase of origin-tracing, calling for conducting the phase II origin-tracing in multiple countries and regions on the basis of the first phase WHO-convened joint study.

China’s open and transparent attitude on origin-tracing was highly praised by the international experts.

The writer is the Chinese Ambassador to Ghana

Origin-tracing is a matter of science. It should be and can only be done by scientists. Unfortunately, however, under the political manipulation of individual countries, origin-tracing has been politicised and used as a tool to shift responsibility and divert contradiction.

They attempt to achieve the political goal of smearing and suppressing other countries by contravening scientific commonsense, fabricating groundless intelligence information, cooking up reports based entirely on lies, sensationalising so-called "lab leak theory" based on the presumption of guilt, and even hindering the WHO from carrying out its duties independently.

These despicable acts have seriously poisoned the scientific and objective atmosphere of origin-tracing and sabotaged international cooperation in fighting against COVID-19.

In recent days, nearly 80 countries have recently expressed support for the WHO-China joint study report and opposition to politicising origin-tracing by sending letters to WHO Director-General, and issuing statements or diplomatic notes.

More than 30 countries voiced their opposition or reservation about the phase II of the WHO Secretariat.

Political parties, groups, experts, scholars and media from many countries have expressed their stance of opposing politicising the origin-tracing and upholding a scientific approach in different ways.

Over 300 political parties, social organisations and think tanks from 100-plus countries and regions in the world submitted a Joint Statement to the WHO Secretariat, calling on the WHO to conduct the study on COVID-19 origin-tracing objectively and fairly, and firmly opposing the politicisation of origin-tracing. This fully shows that the political manipulation cannot blur the eyes of the world, and voice of fairness and justice will never be stifled.

At present, the world is facing the impact of the Delta variant, and the fight against the pandemic comes to a crucial stage.

China stands ready to work with Ghana and other African countries to uphold scientific origin-tracing, oppose political manipulation by politicising of pandemic, stigmatising of the virus and using the origin-tracing as a tool, uphold cooperation while oppose to confrontation.

We need to defeat not only coronavirus but also political virus to make positive contribution to the ultimate victory against the COVID-19.

The writer is the Chinese Ambassador to Ghana.