Uhuru Kenyatta: How will Kenya's outgoing president be remembered? 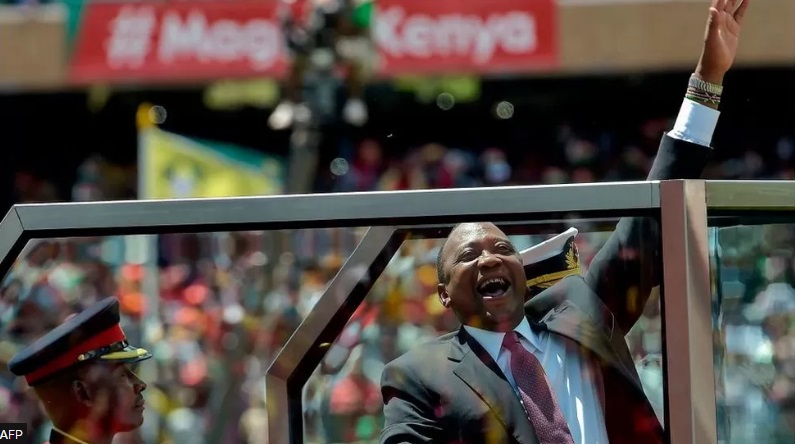 When a student asked Kenya's President Uhuru Kenyatta in 2018 about how he would like to be remembered when he leaves office, he seemed to have been caught off-guard by the question, before singling out two things.

"One is that I will have left a united, cohesive society. And two, that we shall have won the war on corruption," he said to applause.

As he prepares to step down after two terms, and hand power to his former ally-turned-bitter rival, William Ruto, has he achieved these - and other - objectives?

The most significant move towards national unity was in March 2018 when he shook hands with opposition leader and former Prime Minister Raila Odinga as a sign of their political truce.

The now famous "handshake" ended months of uncertainty and unrest following an election that was nullified by the Supreme Court in 2017, and a subsequent re-run boycotted by Mr Odinga, who then conducted his own mock swearing-in ceremony at an event in the capital Nairobi.

But the Kenyatta-Odinga pact was not well received by Deputy President William Ruto, who claimed that it derailed their ambitious agenda of enhancing food security, achieving universal healthcare, making housing more affordable, and boosting the manufacturing sector.

This eventually led to the pair falling out, with Mr Kenyatta withdrawing his support for Mr Ruto and instead backing his rival, Mr Odinga, for the presidency in the August elections.

The tensions between Mr Kenyatta and his deputy have continued even after the election. He is yet to publicly congratulate Mr Ruto for his win, although he has said he will facilitate a smooth transition of power.

The unity that Mr Kenyatta sought may not have panned out as he would have wished, but observers say it was significant for a country that has sought to move away from the widespread inter-ethnic violence that erupted following the disputed 2007 elections, in which some 1,200 people died and thousands of others were forced to flee their homes.

With the just-concluded election passing off peacefully, analysts believe that Mr Kenyatta achieved his quest to bring unity and build a cohesive society, even if his own candidate Mr Odinga lost.

"The handshake created a sense of inclusivity because if there was anything that was going to divide this country and throw it to the dogs, [it] was the whole idea of some people feeling excluded - the idea that government sort of belonged to a section of people or communities," says Egare Kabaji, a professor of literary communication at the Masinde Muliro University of Science and Technology (MMUST).

This truce, however, left a vacuum in the opposition.

"It added confusion on who was in government and who was not," says Nerima Wako-Ojiwa, a political analyst and head of Siasa Place, which helps young people become involved in politics.

The lack of a strong opposition to check on the government's excesses may have played a role in Mr Kenyatta's failure to end runaway corruption and wastage of public resources.

While campaigning for Mr Odinga, he admitted that he had been too lenient in dealing with corrupt individuals. In 2021, he said the country was losing about 2 billion Kenyan shillings ($17m; £14m) every day to corruption.

"To me, the obvious question is: 'Well, if you knew that, why didn't you do something about it?' There are a lot of cases in court, but they seem to be going the wrong way," says Nikhil Hira, a tax expert at Kody Africa.

While observers agree that the country needed new infrastructure to accelerate the economic fortunes of East Africa's largest economy, they have raised concerns about the mismanagement of funds.

"While there is nothing wrong with having debt, the issue is how do we use it?" says Mr Hira.

Aside from the policy debates, some will miss Mr Kenyatta's easy personality, especially when interacting with people in less formal engagements, where he would be "himself".

He would be pictured taking a leisurely stroll on a street in Nairobi with his security trailing from a distance, having nyama choma (grilled meat) in a market surrounded by local people and leaders, or attending golf tournaments where he interacted freely with the patrons.

He also "demystified" State House, by opening it up for many people including children and celebrities to visit and look round. Previously, it was the exclusive preserve of those in power.

He would also often go off-script when giving speeches and give the public a hint of what was happening behind the scenes.

Ms Wako-Ojiwa says this could be endearing, although it could also lead to disorganisation if he was late for meetings.

In 2013, Mr Kenyatta promised to buy laptops and tablets for all schoolchildren to help give them digital skills. But the plan never materialised past a trial phase, with the gadgets supplied to some schools remaining unused and others stolen for lack of storage rooms.

Observers in the education sector faulted the failure of this project on a lack of training for teachers and poor electricity supplies, among other issues.

"We advised the government to instead construct computer laboratories in all schools and have them stocked, and that would have been achieved very easily, but somehow those who make decisions did not listen to some of us. And that was very unfortunate," says Mr Kabaji.

However, his administration did manage to reform the national curriculum.

Although there was some criticism of the changes, the new system is intended to bring out the creative potential of students by giving them the skills they will need to get jobs, rather than just focus on passing exams.

And while an ambitious plan to roll out universal healthcare countrywide has not been fully implemented, hospital bed capacity has significantly improved and new hospitals built.

Away from the domestic scene, internationally, Kenya's standing has improved in the last decade.

It assumed the rotational presidency of the United Nations Security Council where it made headlines in February 2022 after condemning Russia for its decision to send troops to Ukraine. In a statement which was widely shared on social media, Kenya's ambassador to the UN, Martin Kimani, drew comparisons between Africa's experience of colonialism and the Russia-Ukraine crisis.

"We understand that separated people may look yearningly across borders hoping for reintegration but Kenya rejects such a yearning from being pursued by force," said Mr Kimani.

Many other African countries decided to abstain, rather than take sides in the Russia-Ukraine conflict.

Mr Kenyatta also served as chairperson of the East African Community (EAC), working to resolve conflicts in Ethiopia and the Democratic Republic of Congo, where he was appointed the group's mediator.

However, Anthony Francis Mveyange, head of the Partnership for African Social and Governance Research (PASGR), says it was wrong to pursue bilateral trade deals with the US and UK, rather than negotiating through the EAC.

"This could affect how Kenya relates to countries in the regional blocs where it has membership," Dr Mveyange says.

Overall, Kenya was faced by unexpected challenges during Mr Kenyatta's term such as attacks by Islamist militants in Nairobi and elsewhere, the Covid-19 pandemic and the rising cost of living partly caused by the Russia-Ukraine war.

As Mr Kenyatta hands over the reins of power, the challenge for the next government will be to not only deliver some of the big promises they made to the electorate during campaigns, but also to address some of the pressing needs facing citizens.

These include high unemployment and rising cost of living, with inflation rising to a record high of 8.5% in August.