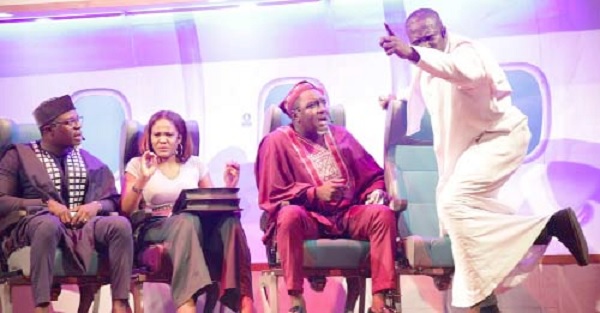 A scene from a Roverman Productions play, “I slept with your wife.”
30.5k Shares

For a long time, theatre was used to project the cultural values of a society but in recent times, the role theatre plays has gone beyond just cultural projections and upholding values.

In Ghana, it gained media recognition in the 90s with “By the Fire Side”- a children's educational and entertainment television programme which combined storytelling (folklore) with music and dance.

Its plots focused on the exploits of Kweku Ananse, the cunning and crafty spider who often outwitted humans and his fellow animals in the animal kingdom.

However, it has become one such media where playwrights and ordinary people can become indirect activists, and contribute their quota towards achieving a better world with their storylines.

The actors in the theatre industry may lack the political and economic power to effect changes but they possess the ability to influence feelings and ideas through their works.

The Chief Executive Officer (CEO) of Roverman Productions, James Ebo Whyte, in an interview with the Daily Graphic Showbiz recently indicated that being in the arts was not for fun but a privilege to always set the agenda.

“Every person wants to talk or dress like an actress, musician.

The power we wield is that we are agenda setters so we must polish our craft to get the attention we want.

Until we realise that, we will always blame the government for our problems,” he said.

In a separate and related interview on Joy FM, the renowned playwright noted that theatre was a development tool.

“Theatre is very powerful in social engineering in changing the mindset of people and shifting paradigms.

The politician can come out with his policies but the policies may not filter down well.

Let a playwright take the issues and weave the story around it, create characters to tell the story of the policy and the policy will sink much deeper than if it is just spoken on platforms and in the media,” Mr Whyte said.

For instance, a play staged by Roverman Productions in 2014, “Games Men Play” was about Ghana’s national team that had qualified to participate in the World Cup.

It explored issues related to corruption within office holders in the society and indiscipline among football players.

Interestingly, some of the issues highlighted in the play surfaced at the World Cup held in Brazil and it had an adverse toll on the sports ministry of Ghana.

Another play titled; “Women on Fire” elaborated the need for government officials to be accountable to the people they serve.

The play further sought to reveal how weak systems put in place to punish such officials were.

Also, the play, “I Slept with Your Wife”told the story of shady deals in our political space, it also preached hope and turnarounds.

On the importance of love in society, a number of Uncle Ebo Whyte’s plays have addressed that, notable among them are; What Dad Left Behind; Devil’s Wife; Different Shades of Women and He Loves Me.

The others are He Loves Me Not; Life is Someway; The Day Dad Came; Sins of the Fathers; Trials of the Ghanaian; Don’t Mess with a Woman; Everyone Has a Secret; Apartment N1 and What's My Name.

The play, “Run for Your Wife” by Image Bureau production in partnership with April Communications Limited staged recently also touched on why society needed love.

The play was about the role different cultures played in maintaining peace.

Additionally, it reminded the populace that Ghana is all we have.

Being a theatre actress has changed my attitude towards, relationship, life, the economy and I have been taught how to uphold truth, discipline and honesty in any endeavour I find myself.

The theatre, dance and other performing arts also teaches people how to express themselves effectively.

As a tool, it deserves appropriate recognition, research, support and advocacy from activists, academicians and donors as a valid strategy to instil societal transformation.

Writer’s email; This email address is being protected from spambots. You need JavaScript enabled to view it.,gh