In Ghana’s aluta democracies, there is one unspoken commandment acknowledged by all: never invoke the name Kume Preko in vain.

The recent ‘Kume Preko Reloaded’ demonstration, without any ambition of making history, was fine in itself.

It would have been a great singing and chanting procession, with placards protesting our broken economy that has brought untold hardships; so then the Government must sit up.

At the end of the day, sweaty participants would then have walked home in peace. 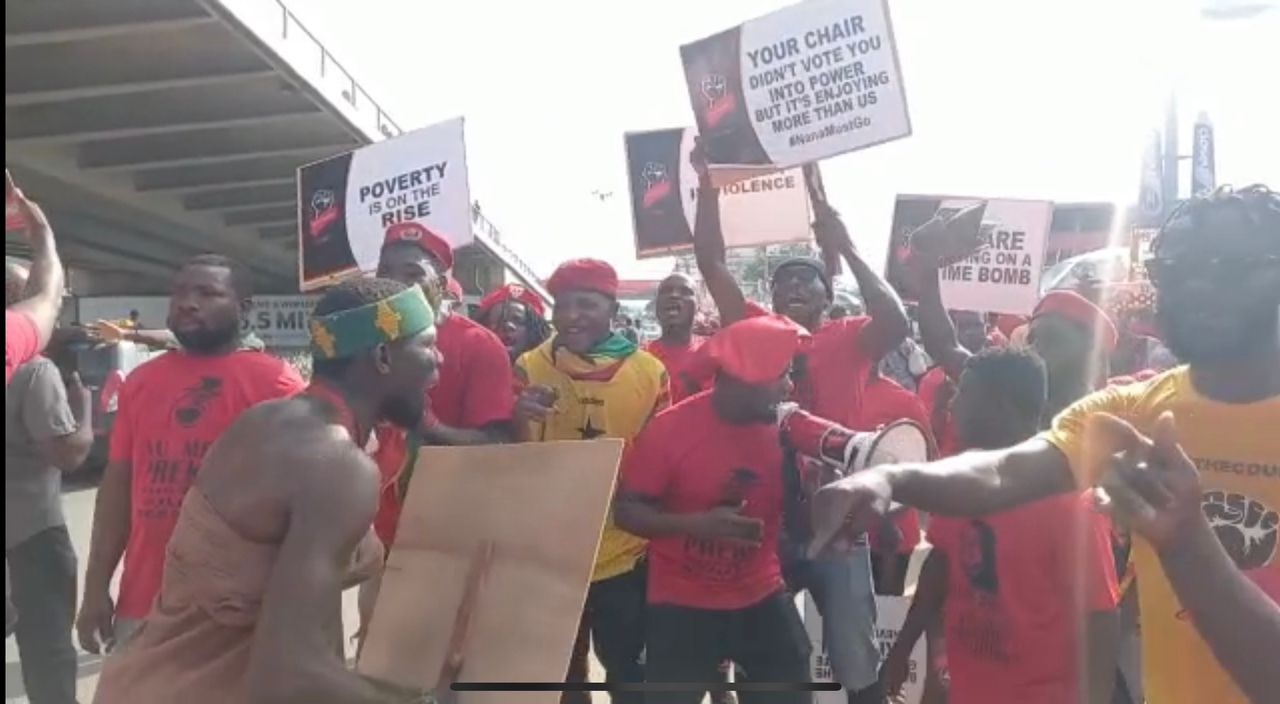 On the other hand, raising hopes of the hungry man, that it was the Saviour Preko itself that was coming, and not delivering on your promise, could change your aluta to a Sere Me Preko (Mock-at-me Demo).


The hungry man then laughs you off and gets more furious, for you have worsened his already empty stomach.

Above all else, you could be made liable to a charge of devaluing the nation’s historic Kume Preko.

New faces in the world of anti-government demonstrations better confess they are class one pupils, that need tutorials.0

They would thereafter visit the Ecowas aluta headquarters for beginner classes.

The board members would be waiting, all of them being honourable prison graduates: Kwesi Pratt, Nyaho my in-law, Tarzan, and Kweku Baako.

There is one other name I shudder to add, just in case I would be cited.

But let me risk saying: Nana ooo Nana. This Big Five may offer free consultancies, and even provide you with free aluta manuals and prospectus that would prescribe appropriate name for your demo, mobilization, recruitment suburbs, placards, dress code, early morning diet, appropriate footwear, and finally safe clinics in case of injuries. Don’t take these lightly.

Aluta diet meant ‘never try aluta on a light breakfast, you will collapse;’ appropriate footwear implied you were likely to be chased by the police, and ‘safe clinic’ was a caution against rushing your injuries to a clinic that may call the police on you.

Oh yes, there are two other names I nearly forgot: Cheechey and Kwame Karikari. The young ones may check the aluta dictionary and find out who is Uncle Cheechey; for security reasons I will not divulge this.

I have added Karikari because, he was doing a fine job as a lecturer on Legon campus and appeared to have been reporting to the Big Five. In the Kutu Acheampong days when anti-military student demos were almost quarterly, Kwame held no placard, nor joined the procession, but played a critical role all the same.

Any time the Legon student mob emerged from the university square moving towards the gate, Kwame would quickly step out of his department near the gate, meet the mob and pretend counselling them to go back to classes. In truth, he was whispering in their ears: ‘go ahead, you have a good case, go ahead; don’t be afraid, go ahead.’ Kwame, today I have divulged the secret.

As for Tarzan, Nana and Co, (NUGS, SRCs, professional bodies, etc) they stood on their feet and endured sleepless nights from the 1970s until 1992 when we finally saw off all the military regimes with their civilian surrogates.

The 1995 historic Kume Preko took place in a democratic era; but constitutional democracy which was three years old, was only on paper. We had a military democrat of whom it could be said, ‘alcohol still dey for his eyes.’ It was Jerry John Rawlings.

Despite the Constitution, anti-Government demonstrations were still a huge risk; heavy casualties and fatalities from ‘stray’ bullets were common. The choice of ‘Kume Preko’ as by-name for a protest march, was most appropriate.

The NDC had introduced a steep value added tax, that had put the prices of goods far beyond the reach of consumers. The ordinary man was helpless and at the brink of starvation. The slogan ‘Kume Preko’ was simply a daring challenge to the trigger-happy police: “Kill me; for he who is dying from starvation fears no bullets.”

As expected, the turn-out of one hundred thousand or more protestors was a big political statement in itself. International news agencies considered it as the biggest demonstration in Ghana‘s history. Following this, a shaken Jerry Rawlings anticipating the possible fall of his Government, made quick u turn, and withdrew the VAT.

But there was another diplomatic fallout: the new World Bank President, Tom Wolfensohn on a 12-day visit to Africa, immediately dropped his favourite Ghana from the list; Ghana was no longer a successful show case for poverty alleviation, he realised.

But the aluta heroes, Nana, Tarzan and Co., showed maturity of vision. Even after the VAT withdrawal, after-shocks of Kume Preko were still allowed to simmer and eventually taper off in Takoradi, Sunyani, etc.

The organisers, chest high, called the little tremors, Sie Me Preko, (Bury me ….) Wie Me Preko, (Finish me, etc.), proudly maintaining the lineage identity. Ghanaians kept singing the melodious Preko refrain until the sweet song petered out, and entered the nation’s archives at Adabraka. Other protests have since followed, each coming with a distinct name and identity.

Here comes 2022. An innocent young man, with lots of promise as a lawyer organizes a demo against government, and expects a monstrous crowd that would tip the scales and make history. He gives notice to surpass the historic Kume Preko. ‘Even one hundred thousand people would be a drop in the ocean,’ he said. He makes bold to call the Demo ‘Kume Preko Reloaded.’ Eeiii.

This was intimidating enough for the IGP to engage scores of Ghana police in a smart turnout, equipped with riot gear and related accoutrement. The agenda was to protect the protestors and quell any incidents from the mammoth attendance.

5th November, as it turned out, the much hyped demo, did not even measure up to the little tremors of 1995. Reporters referred to participants as in the hundreds. And I saw unprofessional cameramen struggling to magnify the crowd, and helplessly stampeding for appropriate angles to match the humbled ambitions of the spokesman. And I heard one desperate organiser, making a spot appeal for more people to join, to no avail.

Quiet observers therefore have volunteered to label the protest, Sere Me Preko since its organisers at all cost yearned to identify with the Preko family, but ended up with a counterfeit. Peaceful protests, big or small, should continue in Ghana though; for they brighten and strengthen our democracy. But immature organizers should consult the gurus, who would advise that a protest march with so many demands often has low yields.

Even more importantly, the thing called a good constitutional democracy, has come to frustrate adventurists these days. With lots of friendly policemen around you, what broken leg or bruised head can you show at a ministerial vetting; and what prison experience or certification can one exhibit? In those days, martyrdom was easier, and it was even the wish of protestors to put themselves in the path of a swinging police baton, and be rushed to a waiting ambulance. The resultant nose injury was important certification for future leadership.

Any resume without reference to a police chase or prison odour, was palpably weak. In the absence of a brutal police encounter, you may threaten a coup by word of mouth, and a newly recruited security capo will quickly pick you up and make your day; he will most likely add the gift of handcuffs on your request. Days after, a mob may follow you in and out of court, to seal your potential as a leader.

Infant organisers may come with different aims; but they need not overreach themselves in hopes of making history.

The elders have said, ‘If the small weaver bird imitates the cry of the big dove, its bottom explodes.’

It was the bottom injuries of the weaver bird that created a scene on November 5. As all that happened, the original architects of Kume Preko were watching, and suddenly burst into uncontrollable laughter.

RIP, Sere Me Preko. An autopsy is not even necessary.